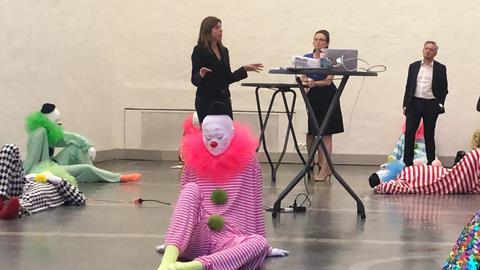 Send in the clowns: Grand designs for digital law

By Joanna Goodman in Helsinki23 September 2019

Clowns, singers and other installations gave an art school vibe to this month’s Legal Design Summit in Helsinki.

But this was a festival with purpose. It was a call to action to think differently about the future of legal services in order to make law better. And there has been progress. In the five years since legal design (the application of design principles to legal services) first appeared on law school agendas, it has evolved into a global movement for change.

The summit’s organisers aim to change the practice of law by making law understandable and accessible via digital platforms.

The summit welcomed 500 attendees from 30 countries to Helsinki’s City Hall. Its ethos is to create a community for change. Co-founder and chief executive Pilvi Alopaeus explained that although the event needed sponsorship to cover running costs, it did not accept more than €4,000 from each sponsor, to avoid any commercial organisation driving the content. Attendees covered their own expenses.

From the UK, Michael Doherty of the University of Central Lancashire discussed overcoming the culture clash between law and design, while Jason Dunning from DWF Ventures used the Lion King film to illustrate ‘black box thinking’ (what to do when something does not work as planned).

There were practical case studies from courts and access-to-justice initiatives, but only a few commercial solutions.

Can design thinking really change the practice of law? Haapio quoted anthropologist Margaret Mead: ‘Never doubt that a small group of thoughtful committed citizens can change the world. Indeed, it is the only thing that ever has.’