The Law Society has raised concerns about plans to make it easier to obtain lasting power of attorney (LPA), warning that sufficient safeguards must remain in place to protect the vulnerable.

The Ministry of Justice and Office of the Public Guardian are consulting on how to simplify the LPA process, including how to move to a predominantly digital service, following claims that the paper-based system is 'cumbersome, bureaucratic and complex'.

Law Society president I. Stephanie Boyce said she supports the government's aim but has 'areas of genuine concern'.

'Our overarching concern is the consultation fails to address how the proposals will work for those who cannot access a digital service; nor does it address the need to ensure that the role of the certificate provider works within a digital process as was intended when the Mental Capacity Act 2005 was passed.’ 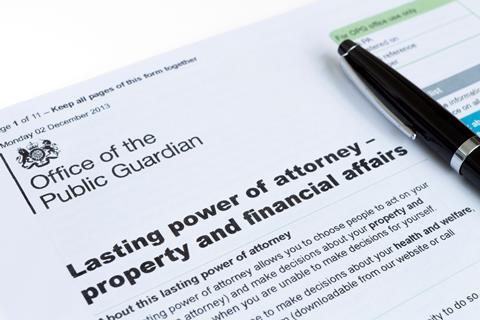 Safeguards cannot be put at risk as a result of digitalisation drive, says professional body

She added: ‘The consultation does not explain how the new proposals will impact on paper channels for LPAs. Many people – such as those in care homes or people with learning difficulties – will need to make an LPA via a paper process and the digital service which currently exists is complicated and hard to use, even for the digitally literate.'

The Law Society stressed that LPAs give ‘sweeping powers’ over life decisions when an individual’s mental capacity is diminished, and are ‘arguably one of the most important legal documents that a person will make’.

The LPA regime currently contains certain safeguards deployed when the deed is drawn up. This stipulates the need for an independent person – the certificate provider – to form an opinion that the person knows that they’re signing. After the LPA has been registered, there is time for anyone to raise a concern, and, if necessary, the Court of Protection can decide that the power should not be registered with the OPG.

‘We want to make sure these safeguards are not put at risk due to MoJ and OPG’s consultation, which seeks to simplify the process, to keep LPAs affordable, and to move to a predominantly digital service,’ the Law Society concluded.