Justice secretary Robert Buckland is planning to tear up the party’s flagship prisons policy of the past two years by reviving support for shorter sentences.

Buckland told a fringe event at the Conservative Party conference that he plans to abandon plans to abolish sentences of six months or less.

His predecessor David Gauke MP, one of the 21 Conservative rebels expelled from the party for voting to require the prime minister to seek an extension to EU membership rather than leave without a deal, had urged the party to push ahead with plans to scrap shorter sentences. 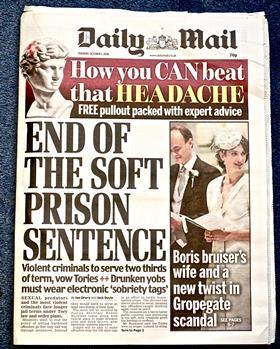 But Buckland, who will address the conference today on ‘toughening up’ the justice system, wants to distance himself from his predecessor. He will channel  prime minister Boris Johnson’s efforts to win over party delegates in the runup to a general election with a more hardline approach on crime and punishment.

It is felt that the parliamentary party, as well as the members, were uneasy at Gauke’s attempts to promote rehabilitation and community sentences over prison.

Buckland is expected to say that the party wants to ensure the criminal justice system is robust enough to handle the expected increase in work that would come from the recruitment of 20,000 more police officers. Last month the government announced it would create an extra 10,000 prison places and give £85m over the next two years to the Crown Prosecution Service to deal with violent offenders.

Addressing the Society of Conservative Lawyers on Monday, Buckland also said the retention of shorter sentences would benefit the criminal legal aid sector who may rely on advising clients likely to receive such a penalty.

Gauke had urged his successor in July to demonstrate ‘persistence and determination and courage’ to follow through with his policy and deliver a ‘safer and more civilised society’.

But the reform, which was reported to reduce prison numbers by 50,000 a year, was criticised by some backbench Conservative MPs when it was introduced earlier this year.

Philip Davies MP told parliament it was ‘frankly idiotic’ to suggest that prison sentences of six months or less should be abolished.

Buckland has also said that for the most serious violent and sexual offenders, the government will abolish automatic early release at the halfway point. Instead offenders will be considered for release under strict licence conditions after serving two-thirds of their sentence.

Buckland will say: 'We owe it to victims to make this change. Punishment and rehabilitation are not opposites. We have to do both. Conservatives believe in offering a second chance to those who are ready to change.’