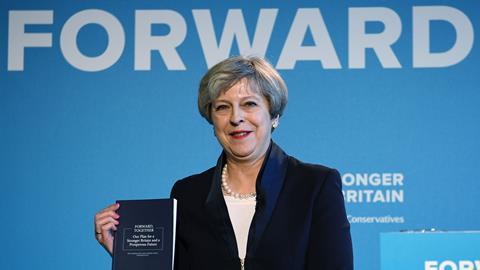 An incoming Conservative government would increase the pressure on professional advisers to close the ‘tax gap’ – the difference between tax due and tax collected – according to the party’s 2017 election manifesto. Lawyers and accountants will be the target of legislation on tax evasion. ‘We will legislate for tougher regulation of tax advisory firms,’ the manifesto said, promising ‘a more proactive approach to transparency.’

No further details were given, but the legislation would seem to supplement chancellor Philip Hammond’s Budget 2017 announcement that accountants, bankers and lawyers would be liable to pay up to 100% of the tax avoided by clients through their advice. The penalties are in force from July.

Under the 'defence' heading, the manifesto states: 'We will strengthen legal services regulation and restrict legal aid for unscrupulous law firms that issue vexatious legal claims against the armed forces.'

Corporate lawyers should prepare for changes to the laws governing mergers and acquisitions. The manifesto outlines plans to require bidders ‘to be clear about their intention from the outset of the bid process’. Legislation would ensure that ‘all promises and undertakings made in the course of takeover bids can be legally enforced afterwards’.

Referencing the lack of publicly-funded legal support for the families of those killed in the Hillsborough disaster, the manifesto promised the appointment of an ‘Independent Public Advocate’ to ‘act for bereaved families after a public disaster and support them at a public inquest’.

On personal injury law, the manifesto says: ‘We will reduce insurance costs for ordinary motorists by cracking down on exaggerated and fraudulent whiplash claims.’ It is not clear whether this would involve measures in addition to changes already made in this area.

Elsewhere, the manifesto confirmed several U-turns from the 2015 manifesto. The Human Rights Act 1998 will not be repealed or amended during the Brexit process, and the UK will remain a signatory to the European Convention on Human Rights for at least the duration of the next parliament.

Section 40 of the Crime and Courts Act 2013, under which publications should pay a the legal cost of libel claims, was enacted but never enforced. A Conservative government would repeal it. Changes in the UK’s devolution setup are ruled out.