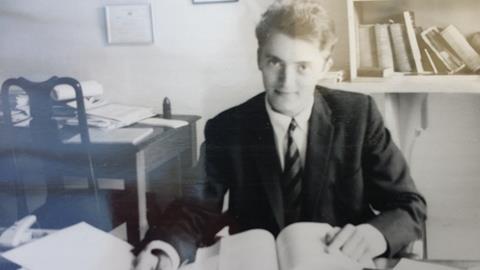 One of the reported 351 people in the UK who died with Covid-19 on Thursday 21 May was Bruce Hodson, a former sole practitioner of Hodson Margetts, who had loyally served the people of Raunds, Northamptonshire as the town’s solicitor for many years until his retirement in 2005.

Mr Hodson had suffered a fractured ankle after a fall at home and caught the virus after an outbreak in his hospital ward and died soon after. Mr Hodson was my Great Uncle Bruce.

I really got to know my uncle in the Summer of 2003 when I did some work with him during school holidays. I was a 17-year-old student looking to embark on a law degree and, I hoped, a career as a solicitor, and he was a solicitor coming towards the end of his career.

I am writing this tribute as, whilst reflecting on his life, I remembered that he had a letter pinned to the wall in the reception area of his office that he had written to the Law Gazette and which was published in the Letters to the Editor section in 2003. I looked up the letter entitled 'Don’t pander' on the Law Gazette website, and was struck by how its message is as relevant today, as it was then.

This memory triggered many fond memories of my time working with him and after his retirement (including watching much of a famous Ashes cricket series whilst I should have been dead filing!).

Mr Hodson, as I was instructed to call him whilst in the office, was 'old school'. There was no PC at his desk, no case management software and dictations were recorded on to tapes. I would say that, given he had worked as a sole practitioner for such a long time, I was, in fact, looking through a window into a more historic method of practice; an era which has become extinct with the fast paced requirements of today.

Uncle Bruce was a private man who took his position of trust seriously. He informed me that he would not spend time in local pubs as it may give the impression to clients who saw him, and who may have discussed sensitive matters with him in confidence, that he might be gossiping and thereby risk compromising his respected position in the town.

He could appear stern in the office. However, his bringing his dog to the office every day, which he informed me helped put anxious clients at ease, I felt, was a chink in his armour. I realised after he retired that his sternness was a façade.

Over the years since his retirement, Uncle Bruce enjoyed hearing about how my career was developing and remained interested in the law and how the working environment was changing. I learned many valuable lessons from him during those discussions (including, for example, how people should not be motivated by money when seeking a career in law!). It is safe to say that his legacy will continue in my career, and I will continue to pass on those lessons to junior and future solicitors for years to come.

Daniel Billson is a senior associate at Prettys Solicitors LLP