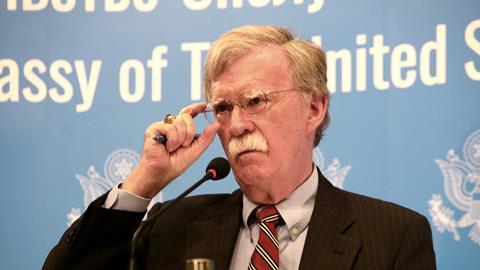 Trump's security chief warns: 'ICC is already dead to us'

The US administration has said it will refuse to help international prosecutors in any way with their investigations into alleged war crimes.

Speaking on the eve of the anniversary of the 9/11 attacks, US national security adviser John Bolton appeared to threaten the International Criminal Court with sanctions and potential prosecutions against officials.

The ICC has insisted it will continue to do its work ‘undeterred’ in accordance with its principles and the overarching idea of the rule of law.

Bolton, addressing an audience in Washington yesterday, said he wanted to make a ‘clear and unambiguous message’ on behalf of President Trump to use any means necessary to protect American citizens.

‘We will not cooperate with the ICC, we will provide no assistance to the ICC and we certainly will not join the ICC,’ he said. ‘We will let the ICC die on its own. After all, for all intents and purposes the ICC is already dead to us.’

The ICC is reported to be on the verge of bringing prosecutions into alleged war crimes committed by US military and intelligence staff during the war in Afghanistan.

In a statement published in response to Bolton, the ICC said: ‘The court was established and constituted under the Rome Statute, the court’s founding treaty – to which 123 countries from all regions of the world are party and have pledged their support through ratification – as an instrument to ensure accountability for crimes that shock the conscience of humanity. The court is an independent and impartial judicial institution.

‘The court’s jurisdiction is subject to the primary jurisdiction of states themselves to investigate and prosecute allegations of those crimes and bring justice to the affected communities. It is only when the states concerned fail to do so at all or genuinely that the ICC will exercise jurisdiction.’

Dr Mark Ellis, executive director of the International Bar Association, said Bolton’s attack not only dismissed the principle of accountability for war crimes, but also ‘reinforces the Trump administration’s repugnant policy of exceptionalism’.

He added: ‘The Trump administration seeks to dismantle completely a legal entity, the sole purpose of which is to bring justice to victims of the most unimaginable atrocities. History will rightfully judge this pernicious policy as an affront to the dignity of mankind.’