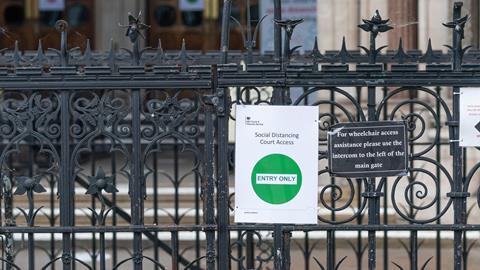 What you may have missed from the magazine

A digest of important developments since our last print edition

Please note this is from the print magazine as a round-up of what you may have missed over August.

Emergency so-called ‘Nightingale courts’ opened across England and Wales amid concerns about security and calls for the courts service to do more to tackle the backlog of cases. The new premises include Hertfordshire Development Centre, Middlesbrough Town Hall and Swansea Civic Centre. Meanwhile, a press conference room at the Ministry of Justice in Westminster has been converted into a courtroom dealing with family court work.

Master of the rolls

Solicitors welcomed the appointment of the Rt. Hon. Sir Geoffrey Vos as the next master of the rolls. The current chancellor of the High Court will take over from Sir Terence Etherton as the second most senior judge in England and Wales on 11 January.

Sir Geoffrey, who was called to the bar in 1977, was appointed as a lord justice of appeal in 2013 and became chancellor of the High Court of England and Wales in 2016. As chancellor, he has taken an active role in encouraging technology-enabled innovation, such as smart contracts.

Law Society president Simon Davis said: ‘His work clearly demonstrates his commitment to the rule of law, dedication to the promotion of our jurisdiction and support of legal technology as a driver of growth. We look forward to working with the new master of the rolls to promote England and Wales as a global legal centre.’

The Solicitors Regulation Authority issued a new warning to solicitors about becoming involved in dubious investment schemes after reviewing recent cases leading to regulatory action. An updated warning notice published last month says that the regulator continues to receive reports about law firm involvement in questionable investment schemes. ‘This is a key risk for consumers resulting in significant financial losses, which in some cases can be more than £1m per scheme.’

A thematic review of 40 investigations found that in 63% of cases, solicitors had failed to carry out proper due diligence on those who ran the schemes, with no checks carried out at all in 20% of cases. Investigations led to seven firms being intervened in and 20 referrals to the Solicitors Disciplinary Tribunal.

A ‘LawTech transformation fund’ to support new models of delivering justice, on top of further investment in justice budget as a whole, are on the Law Society’s wishlist for the chancellor of the exchequer’s comprehensive spending review.

A campaign urges ministers to use the comprehensive spending review to end ‘decades of cuts and crises’. The Law Society proposes a cross-departmental strategy on law and justice. To support technology, it proposes the government invest £11.2m a year in ‘a dedicated LawTech transformation fund to unlock productivity and support the development of new legal and justice delivery models’.

The protocol covers moratoriums upon limitations until three months after the protocol ends. Email becomes the default position for serving and receiving documents. Clients should be examined remotely or virtually where possible for medical expert reports. Parties should adopt a ‘reasonable approach’ to requests for interim payments of damages and payment on account of costs. Video-conferencing for settlement meetings and mediations is encouraged. On hearings and adjournments, the protocol states that NHS staff should not be required to do anything which affects frontline clinical care. ‘Equally, however, the Covid-19 situation should not be used as an excuse for avoidable delay in matters.’

The agreement will continue indefinitely until one of the parties gives notice to end it.

Former in-house lawyers at telecoms giant BT who transferred to DWF under an outsourcing deal are leaving the international firm following proposals to relocate them from Sheffield to Leeds. DWF confirmed that 27 employees, who continued to work from BT’s office in Sheffield after a strategic partnership was announced last year, were taking voluntary redundancy. The firm said staying in BT’s Sheffield office was no longer viable.

In July last year DWF won a tender to become BT’s ‘strategic legal partner’, providing insurance and real estate advice for a five-year period. Staff from BT’s in-house claims and corporate property teams transferred to DWF’s managed services practice. Over 40 employees were in scope to transfer to DWF. The firm said it began consulting on relocation plans earlier this year.

The government announced it was following up on its 2019 manifesto commitment to end the ‘abuse’ of judicial review by launching an independent review to be chaired by Lord Faulks QC (Edward Peter Lawless Faulks), a former Conservative justice minister.

For the review, a six-strong panel will consider: whether the terms of judicial review should be written into law; whether certain executive decisions should be decided on by judges; which grounds and remedies should be available in claims brought against the government; and any further procedural reforms such as timings and the appeal process.

HM Land Registry confirmed that it will start accepting electronic signatures – paving the way for the entire conveyancing process to be conducted electronically.

To sign the deeds electronically, a conveyancer will need to upload the deed to an online platform, which sends a link to the signatories. Once they have completed the necessary authentication checks, they ‘sign’ the document electronically in the physical presence of the witness, who also signs. The conveyancer is then notified that the signing process has been done and can submit the completed deed to Land Registry with their registration application.

The online platform will require a two-factor authentication process for the signatories and witness. A link to the document is emailed and an authentication code is sent to the individual’s mobile phone.

The government announced at the last minute that it was extending a suspension on housing possession proceedings by another four weeks. Possession proceedings have been suspended since March to protect private and social renters, and those with mortgages and licences covered by the Protection from Eviction Act 1977, during the Covid-19 crisis. Courts were due to resume dealing with cases on Monday 24 August, with landlords facing new requirements. The government also announced that landlords will be required to provide tenants with six months’ notice in all bar those cases raising other serious issues, such as those involving anti-social behaviour and domestic abuse perpetrators, until at least the end of March.

Litigation funder Therium Capital Management announced a tie-up with a London artificial intelligence startup to forecast the prospects of success in cases it considers taking on. Therium said it will draw on Solomonic Litigation Analytics, which is the latest sign of confidence in the ability of systems based on ‘big data’ to predict which way a particular court is likely to rule. Therium co-founder and chief investment officer Neil Purslow said: ‘Strong historic case data is now available to underpin our investment decisions when assessing claims that require funding. We look forward to exploring how big data and AI can add value to how we undertake due diligence and value our claims.’

Liverpool Crown Court began piloting Covid-19 operating hours as part of HM Courts & Tribunals Service’s coronavirus recovery plan. The court will have separate lists for the morning and afternoon. The morning list will operate from 9am to 1pm. The courtroom is then cleared and cleaned. The afternoon list will operate from 2pm to 6pm. The Law Society issued guidance for litigators and solicitor-advocates but said it has repeatedly made clear to the Ministry of Justice that extended hours are not the right approach to tackling the court backlog. The Society has urged the ministry to first make maximum use of normal court hours and the existing court estate, quickly take up further building space and avoid sitting restrictions for judges.

National firm Kingly Solicitors Ltd, which had 16 offices across England and Wales, was shut down by the Solicitors Regulation Authority. According to a statement published by the regulator on 12 August, the outfit – which traded under several different names – had not complied with one or more of the terms of its licence.

The SRA has also intervened in the practices of Kingly’s three directors, Champika Ratnayake, Simon Hutcheson and Simon Crosby Peacock (who was admitted as a solicitor in 1986). It added that there is ‘reason to suspect dishonesty’ by Nurul Miah as a manager of the firm in connection with the firm’s business; or any trust of which the firm is or was a trustee; or any trust of which Miah is or was a trustee in his capacity as a manager. Kingly Solicitors, which was known as RH Legal until last year, began acquiring law firms across the UK in 2016.

The Bar Standards Board came under fire from students and the profession last month after technical glitches meant dozens of bar school students were unable to sit core assessments.

Students on the Bar Professional Training Course were unable to complete mandatory online exams due to software issues. Meanwhile, those who attended test centres claim they were banned from drinking water at their desks despite soaring temperatures, and one candidate reported urinating in a bottle after being told that he could not leave his computer during a three-hour assessment.

The BSB has promised to commission an independent review into the situation and said it will try to arrange pen-and-paper resits in September. However, it has so far refused to waive the requirement that students pass the exams before being called to the bar.