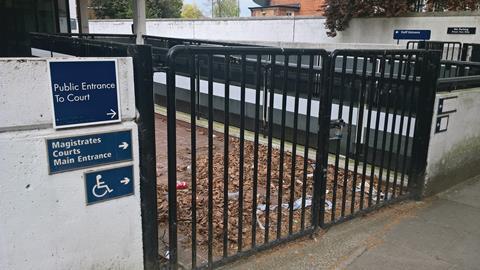 A court closure announcement is usually guaranteed to raise the hackles of the local MP, who can take to their soapbox and plead for mercy on behalf of their constituents, whether they are law-abiding or otherwise.

In Cambridgeshire, for example, the case is pretty strong for granting a pardon to Cambridge Magistrates’ Court, which serves a population of 124,000 people in one of the fastest-growing cities in the UK. The building itself, opened only 10 years ago, has six courtrooms and is a 90-minute train ride (with one stop) from an alternative venue at Huntingdon.

Daniel Zeichner, Labour MP for Cambridge, says the closure plans have been met with ‘astonishment and universal opposition’. The outcry is cross-party, with neighbouring South Cambridgeshire MP Heidi Allen, a Conservative, saying: ‘I don’t believe enough impact analysis has been done for me to support the closure of Cambridge Magistrates’ Court’.

So what of the other MPs whose constituency is affected by the closure? Indeed, constituents of South East Cambridgeshire face the longest trek of all to alternative sites in the north of the county.

However, the representative in question happens to be justice minister Lucy Frazer, who actually announced the potential closure in January. Her Twitter feed and website makes no mention of the plans, and indeed Frazer has been required to defend the closure when pressed for an explanation in parliament.

Still, Frazer can always draw comfort from her boss if she feels conflicted by closing a court that her constituents would presumably like her to defend. Another of the buildings in the line of fire is Maidenhead Magistrates’ Court. The local MP? One Theresa May.