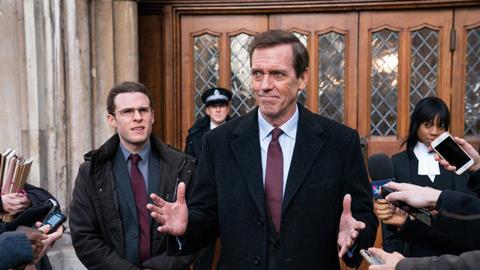 Would Hugh believe it?

So, the Ministry of Justice has been renamed and moved to the north side of Parliament Square; the secretary of state has been stripped of his dual role as lord chancellor and the department has been given sole responsibility for prisons – and very little else.

Hold your cheers for the moment. This vision of the very near future appears only in Roadkill, the BBC mini-series written by veteran playwright David Hare. The drama has attracted acclaim for Hugh Laurie’s portrayal of a rising ministerial star with more skeletons in his closet than the Royal College of Orthopaedics. Not a particularly original plotline, Obiter thinks, but some legal themes feature too.

Predictably, some details will bristle. We open with Laurie’s character being vindicated by a libel jury – something we haven’t seen since the Defamation Act 2013 (though a colleague points out that the unusual circumstances implied might require a jury). Victory is rapidly followed by promotion to ‘minister of justice’ and the unveiling of an oven-ready plan to empty our prisons. This is systematically sabotaged by the department’s imperious permanent secretary, Dame Vanessa (come to think of it, this bit rings true).

And, of course, wigged and tabbed barristers are in the thick of it throughout. Solicitors – despite a name-check for the Law Society – are as invisible as clapperboard boys.

Never mind, we liked the scenery – especially the shot of the bandstand in Lincoln’s Inn Fields, mysteriously devoid of the personal trainers who occupy it permanently in real life.