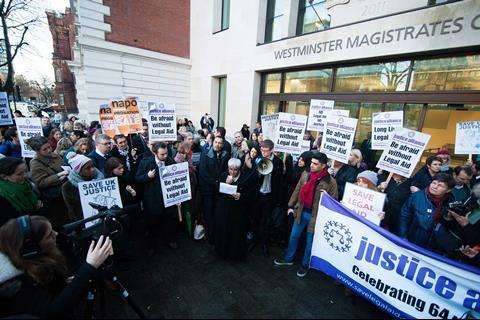 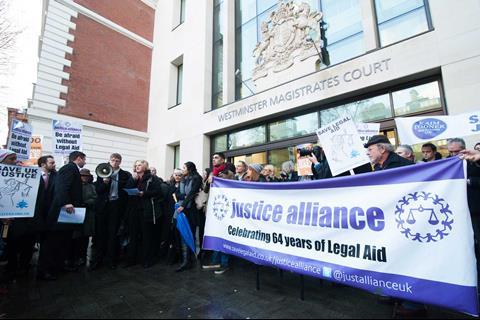 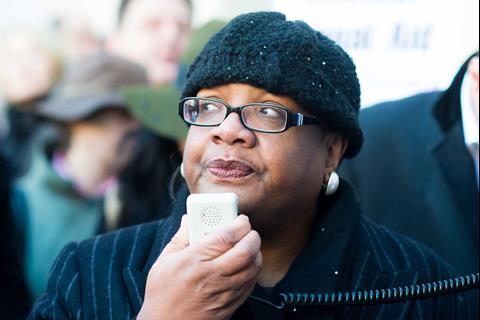 The Ministry of Justice faces a winter of discontent over criminal legal aid cuts, after lawyers vowed to repeat today’s unprecedented direct action against the reforms.

As barristers stayed out of court this morning, joined by some solicitors, lawyers wielding placards staged demonstrations against plans to cut £220m from a criminal legal aid budget of about £1bn.

The largest demonstration, numbering around 300, took place outside Westminster Magistrates’ Court. Other protests were held outside London’s Old Bailey and Southwark Crown Court, as well as outside Manchester, Birmingham, Liverpool, Bristol, Chelmsford and Cardiff Crown courts.

The protesters reiterated concerns that the cuts will lead to a diminution in the quality of advocates, guilty people walking free and wrongful convictions of the innocent.

Chairman of the Criminal Bar Association Nigel Lithman QC told the gathering at Westminster Magistrates’ Court: ‘On this momentous day we stand on the brink of the collapse of the criminal justice system. After 37 years at the criminal bar I don’t say that lightly.’

Branding the MoJ a ‘Leviathan eating away at the legal aid system’, he said access to justice is as important in a free society as education and the National Health Service.

He challenged the government’s repeated assertion that England and Wales has the most expensive legal aid system in the world, stating that it comes in only thirteenth place in Europe.

Lithman said he had compiled a ‘thin-cat list’, rebutting the often cited assertion that criminal barristers are ‘fat cats’. He highlighted the challenging financial situation of many at the criminal bar, including one woman in her second year of practice who earns only £13,800.

‘We cost a pittance and we represent great value for money,’ insisted Lithman, who warned the country is moving to a world where it will be unheard of for citizens to get representation.

Despite the government’s rhetoric about being tough on crime, the public, said Lithman, will have to get used to a situation where the guilty go unconvicted.

Referring to criminal lawyers as an ‘oppressed group’, Lithman added: ‘We are being kicked in the teeth, but no more. We have found a voice and we will be heard.’

Speaking at an event organised by the London Criminal Courts Solicitors’ Association and the Criminal Law Solicitors Association, Law Society head of legal aid Richard Miller stressed that Chancery Lane understands why  criminal solicitors are frustrated and angered by the current MoJ proposals.

He added that if the Society and its members work together, he is ‘confident’ they can show the  government that the cuts will be ‘unsustainable and ill-advised’.

Matt Foot, of the Justice Alliance, which organised the Westminster rally, said: ‘This is a start. If Grayling does not listen, we’ll be back here again.’

The Westminster rally was also addressed by Janis Sharp, the mother of Gary McKinnon, who fought extradition to the US over computer-hacking charges, and Patrick Maguire, one of the Maguire Seven wrongly convicted in the 1970s of handling explosives.

Sharp said that without legal aid lawyers, her son would have taken his own life, while Maguire warned of an increase in undetected miscarriages of justice if the cuts are implemented.

Labour MP for Westminster North Karen Buck said it is not just high-profile cases that will be affected; people from all backgrounds can find themselves accused of crimes. She stressed in particular the potential impact on young people, especially those who are homeless or who lack family support.

Many such people, she said, ask her for help finding a lawyer to represent them. ‘I am proud of the local legal aid firms who give them representation,’ she said but expressed concern that this may become harder in the future.

‘The relationship between the legal profession and [justice secretary] Chris Grayling and the government has broken down – that is a sad and worrying circumstance,’ added Buck.

Labour MP for Hackney Diane Abbott told the Gazette: ‘Legal aid is the cornerstone of the welfare state. These cuts will end up costing the government more than they save. I will make the argument for my party to reverse the cuts.’

Julian Hayes, senior partner at Hayes Law, told the Gazette: ‘If the cuts come in, we’ll go back to the bad old days of the 1970s with miscarriages of justice.’ Referring to the historical police drama ‘Life on Mars’, he warned that England and Wales would revert to ‘Life on Mars’ justice.

Director of the Legal Aid Practitioners’ Group Carol Storer said: ‘The government thinks it can keep making cuts, but there comes a point where you can’t cut anymore, and that has been reached. Days like this will escalate if the government keeps trying to make cuts.’

A spokesperson for HM Courts & Tribunals Service this afternoon played down the impact of today’s action, describing it as ‘limited and manageable’. Ninety-five percent of listed magistrates’ courtrooms sat, as did 73% of Crown courtrooms, the spokesperson added.