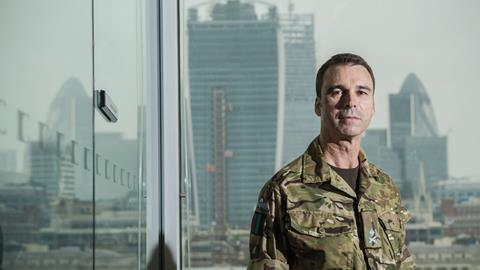 Lawyers wanted for the reserves

An in-house lawyer who is also Britain’s most senior reserve officer has opened a new campaign – to persuade more law firms to engage with the armed forces.

Major General Ranald Munro, appointed assistant chief of defence staff last year with a brief to build up the reserve forces by 50%, said law firms are ‘under-represented’ among the 1,400 organisations to have signed the Armed Forces Covenant.

Signatories of the covenant typically agree to encourage employees to serve in the reserves and support the employment of veterans and service spouses. No law firm is represented among the 48 organisations to win gold awards under the MoD’s employer recognition scheme.

‘We need to break down some of the myths,’ Munro told the Gazette last week at an event aimed at encouraging lawyers to engage.

Munro’s message is that employers as well as individuals benefit when lawyers serve in the reserve forces. ‘Law firms are renowned for working their people hard but that is not to say that as a supportive employer you would not benefit,’ he said. Reservists learn ‘soft skills’ such as mission analysis. ‘How to extract information to make decisions, how to assign people to a mission; these are skills that are directly transferable from the military to the work space and vice versa.’

The current defence strategy requires membership of the reserve forces to reach 35,000 by 2020, up from 25,000 in 2015. Meeting this target will require a new approach to recruitment, Munro said. ‘I think we’re growing up.’

In particular the proportion of women and people from minority ethnic communities serving in the reserves will have to increase. Specialists would also be welcome at an older age than traditional recruits, he said. Applications from cybersecurity experts, doctors and lawyers in their fifties would be looked on favourably, he added: ‘It’s about flexibility at the end of the day.’

Munro stressed that the military covenant was flexible – ‘firms can chose how much they are able to commit’. Likewise the armed forces recognise that a reservist’s commitment might increase and decrease over their career.

‘There is definitely a synergy between lawyers, law firms and defence,’ he said. ‘As for how many lawyers we want, we want as many as we can get, quite frankly.’