Next steps on legal aid

Independent studies jointly commissioned by the Law Society and Ministry of Justice must form the basis for duty contracts, writes Desmond Hudson. If the reports find there is an unacceptable risk of market failure, the Society cannot support the plans.

In September, the government published its second consultation on criminal legal aid. This consultation reflected the discussion between the Law Society and the Ministry of Justice on the issue of duty contacts – in the absence of a common position it was decided that the MoJ’s final decision would be based on two independent published studies from Otterburn and KPMG.

The Law Society placed considerable importance on a fact based basis for the duty contract in the absence of common agreement.

It is implicit in such an approach that the MoJ should proceed if the independent evidence and analysis gave sufficient reassurance that their proposals would not fundamentally harm the legal aid market and the solicitors practising in it.

We therefore jointly commissioned with the ministry research by Otterburn Legal Consulting and the accountancy firm KPMG to inform the decision as to the approach and its practicality, and issues concerning rural provision and the maximum possible number of duty contracts compatible with long-term financial feasibility.

We have always been clear – and can reaffirm today – that if the reports suggest that the plans pose an unacceptably high risk of market failure the Society on behalf of its members cannot support the proposals. Our response to the government’s plans, when they are published, will be informed by the independent research.

It will not be a surprise that the MoJ claims the analysis of Oxford Economics, showing that the ministry’s budgetary forecasts are hyper-cautious, is wrong; because the argument it advances does not support the ministry’s case for rate cuts.

The purpose of the Oxford Economics analysis is to step outside the noise and analyse the underlying longer-term trends about legal aid expenditure. While not a guarantee of the future the work is an important contribution to the debate. The graph below demonstrates the point. 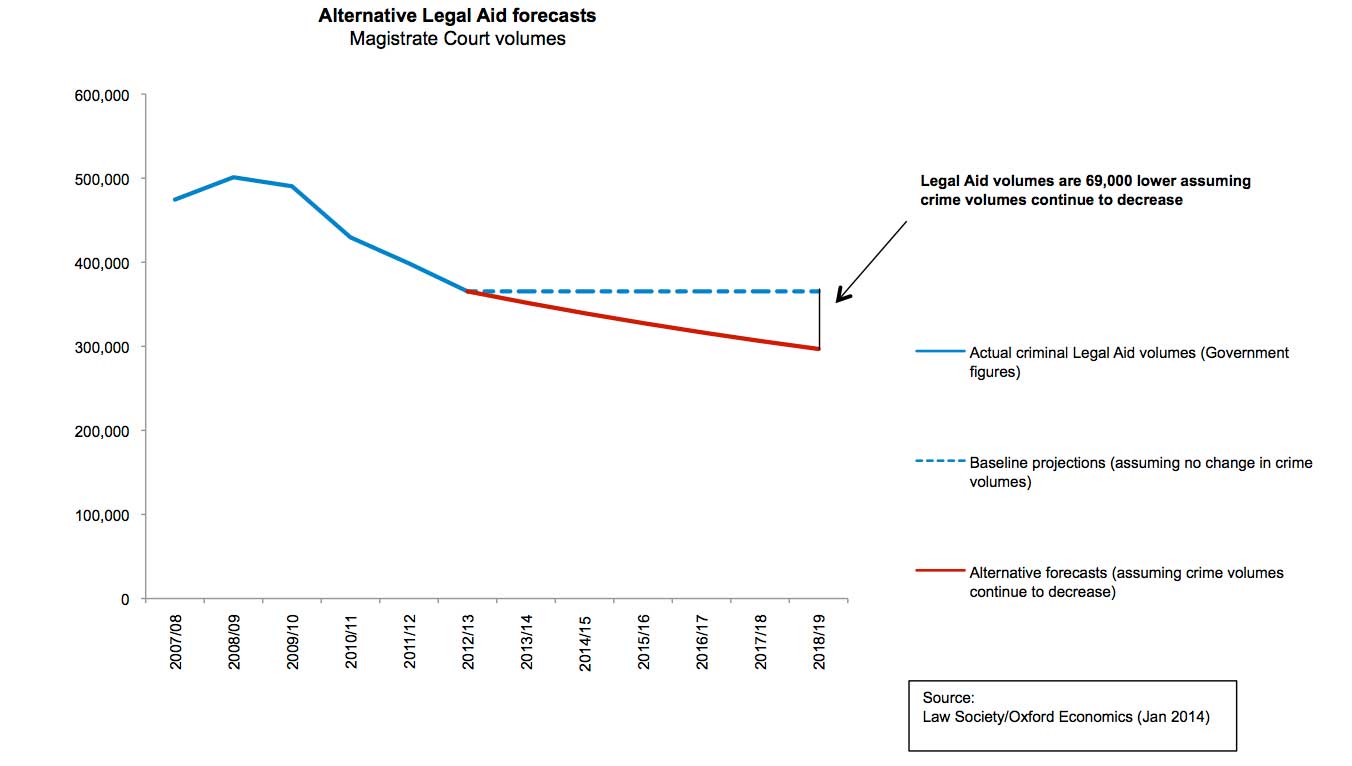 If nothing else changed, however accurate the ministry might be about 2015, it could be argued that the MoJ’s short-term forecast for 2018 (which it will publish in 2017), may be closer to the current Oxford forecast for 2018.

We have said from the start we do not believe that this market can sustain the cuts the MoJ is proposing. The Oxford Economics report begs the question, ‘why take the risk of a collapse of your supplier base if you don’t have to?’.

The news last week that the MoJ is recruiting two more QCs to its Public Defender Service suggests that the ministry sees this as a way of breaking the dispute with advocates over fees.

The most effective way to make any decision including how to safeguard the future of a high-quality criminal defence system is to act based on what the evidence says. That is the approach we have adopted throughout and which will continue to guide us as we oppose the cuts.

We believe the evidence against the governments cuts continues to be overwhelming. What the government is proposing to do to our criminal justice system could irreparably damage it. The Oxford Economics research indicates that this is not a risk the government has to take.

Desmond Hudson is chief executive of The Law Society