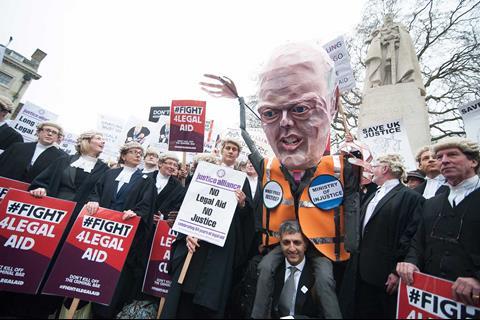 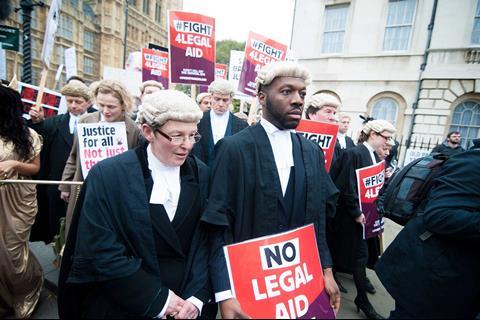 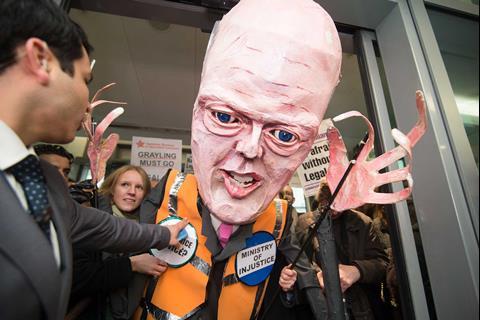 Thousands of criminal lawyers around the country staged a second round of protests against the government’s legal aid cuts today, bringing widespread disruption to courts.

In London over 2,000 barristers and solicitors demonstrated outside parliament before marching to the Ministry of Justice.

Kingsley Napley solicitor and drummer with pop group Blur, Dave Rowntree, spoke to give his support, as did actress Maxine Peake, who stars as Martha Costello QC in the BBC’s drama Silk.

Peake told the Gazette: ‘Anyone in their right mind should be supporting this; it’s terrible what they’re doing.’

Paul Harris, former president of the London Criminal Courts Solicitors’ Association, told the rally the action is not about the cuts, but about the rights of ordinary people to have an unfettered right to equal access to justice.

He said lawyers from both sides of the profession are united in fighting the cuts and the political ethos underpinning them, in which state power increases while its accountability lessens.

The justice system, said Harris, is in ‘meltdown’ – the Legal Aid, Sentencing and Punishment of Offenders Act is having a ‘devastating effect’ on access to justice, the family courts are grinding to a halt and fees are at an ‘irreducible minimum’.

Harris said solicitors face cuts higher than the 17.5% suggested by government. They will only be able to survive by ‘slashing costs’ and there will be no room for experienced solicitors.

Cuts to Crown court advocacy fees, he said, are ‘fatal’ to a properly functioning justice system.

Chairman of the Criminal Law Solicitors’ Association Bill Waddington called for a halt to the cuts and full review of the criminal justice system.

Chairman of the Criminal Bar Association Nigel Lithman QC, accused Grayling of ‘killing’ the criminal justice system. The Ministry of Justice, he said, is not fit for purpose and is an embarrassment to the rest of government, which is striving to improve social mobility.

A justice system that has been built up over centuries, has taken the government ‘a blink of an eye’ to demolish, said Lithman, stating that the whole system in ‘revolt’.

For the opposition, Khan told the rally ‘We are with you and we’ll fight’, but he made no commitment to reverse the cuts if Labour is elected to government.

This is unlikely to be the last action taken against the government’s plans. Chakrabarti told the rally: ‘You have been too quiet for too long my learned friends. But this day had to come and it may have to come again and again and again.’

Ian Lawrence, general secretary of probation union NAPO, invited the lawyers to co-ordinate their next action with NAPO’s planned strikes, scheduled to take place from noon on 31 March and all day on 1 April in protest over plans to privatise the probation service.

A Law Society spokeswoman said: ‘We fully understand why some criminal lawyers have reached the point of despair after two decades without increases in legal aid rates, shrinking volumes of work and the MoJ’s plans for further cuts.’

An HM Courts & Tribunals Service spokeswoman said the impact of the action was ‘limited and manageable’ – 98% of listed magistrates’ courtrooms sat, as did 71% of Crown courtrooms.

An MoJ spokeswoman said: ‘At around £2bn a year we have one the most expensive legal aid systems in the world.

‘As everybody knows, this government is dealing with an unprecedented financial challenge and the MoJ has no choice but to significantly reduce the amount of money it spends every year,’ she said.

She said the ministry has spoken ‘at length’ over the past year with solicitors and barristers about the reforms and its final plans reflect many of the changes they asked for.

‘Our reforms present no change to the current system where anyone charged with a crime, or subject to investigation, is provided with a qualified lawyer through legal aid,’ she added.

One of the largest criminal law firms did not take part in today’s protest action, but will instead instigate a ‘work to rule’ from 20 March.

Managing partner at Burton Copeland Mike Mackey yesterday issued a statement confirming the firm would not take part in the protest, although it will support the bar’s ‘no returns’ policy and will not deploy higher court advocates to fill the gaps left by barristers who are not working today.

Instead, the firm will begin a work to rule from the date that the first tranche of 8.75% cuts to solicitors’ legal aid fees are implemented.

Mackey said: ‘The cuts are driven by political imperative and proceed because the public are not particularly on side. We will not achieve public sympathy by not doing our job.’

In order to fight effectively, he said disruption should be achieved by ‘doing our job to the letter, complying with our duties to the court and clients’ and the Criminal Procedure Rules.

‘The system functions only because of our goodwill. That goodwill is to be withdrawn on 20 March,’ he warned.

For each case where the CPS has failed to comply with the rules, said Mackey, the firm will send separate emails to the court and CPS, repeating where replies are not forthcoming and non-compliance continues.

The firm, he said, will insist on receipt of unused schedules 14 days prior to trial. In the event of failure, lawyers will insist on an adjournment of the trial.

Neither will it assist the court in cases where there has been a delay in granting legal aid, and in complex cases will not begin any advance defence preparation until legal aid is granted.

In addition, he said, the firm’s lawyers will not deal with cases ‘on the hoof’ due to late service by CPS.

Mackey said: ‘We believe the cumulative effect of these measures will be much greater than closing the courts for a morning.

‘Grayling can hardly complain when we are simply complying with the rules. Withdrawal of goodwill is more effective than withdrawal of services.’