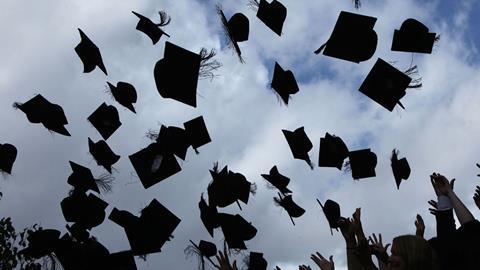 Academic results, including a first-class honours degree, are one of the least significant factors for businesses looking to recruit graduates, a survey has suggested.

According to the Global Employability Survey, the two most important factors were professional experience and a high degree of specialisation.

Figures released by the Higher Education Statistics Agency show that 24% of students gained a first-class degree in 2015/16, compared with 17% in 2011/12.

Yazid Lallmahomed, founder of student career website robincould.com, said the issue does not lie with the number of graduates obtaining top-class honours, but within the course criteria.

‘Many degree titles are misleading and do not teach the skills and characteristics that employers require. It means employers have to rely on other experiences to evaluate whether an individual is the right candidate,’ he said.

As honourable as it may be for the individual, the value of the degree is playing less of a role in employers’ recruitment decisions, Yazid said.

Previously those wanting to qualify as a solicitor had to complete a degree-level qualification before taking a Legal Practice Course and a period of work-based training.

The Solicitors Regulation Authority, which is planning to introduce the Solicitors Qualifying Exam, a new route into the profession through a centralised assessment, initially suggested that a requirement for those taking the exam to have a degree should be removed.

However, it has since said a degree ‘or equivalent’ will be sufficient.

The Higher Education and Research Bill, currently being debated in the House of Lords, aims to make universities do more for students than just award high grades.

Universities will be rated gold, silver or bronze depending on the quality of teaching and the employment rates of their graduates.