Barrister who overcame prejudice to reach the Old Bailey

It must be challenging writing about a parent, especially a very famous one like Rose Heilbron. The reader sees not only the public face but the private person as well. Dame Rose Heilbron qualified as a barrister in the 1930s. As a woman, she achieved a number of notable ‘firsts’: she gained a first-class honours degree in law at the University of Liverpool, and she won a scholarship to Gray’s Inn. She was also one of the first two women to be appointed King’s counsel, the first woman recorder, and the first woman judge to sit at the Old Bailey. She was also the second woman to be appointed to the High Court. She was a remarkable example of professional success. This biography of Rose Heilbron was first published in 2012 and is now out in paperback; the author is a QC herself. 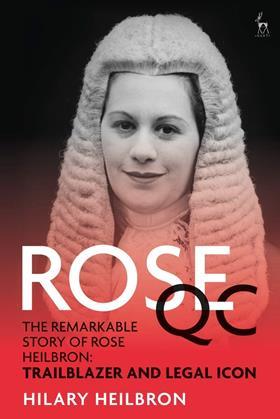 It is not a book where solicitors feature highly other than as sources of work. One exception is the case of Louis Bloom who Rose represented. He was a solicitor from Hartlepool who was accused of murdering his mistress in his office. He was having an affair with a former client. Her previous lover had been shot by his father who was trying to end that relationship. She became hysterical in Bloom’s office and he grabbed her by the throat and pressed her neck until she died. He then telephoned the police to admit he had ‘done it’. You will have to buy the book to find out what happened next.

She practised in the golden age of murder trails and had a varied career covering civil and criminal work. She acted in a murder case without a leader at the age of 28. She also successfully appeared in a very early discrimination case in 1944 brought by a West Indian cricketer who was refused accommodation in a hotel; he won £5 damages.

In the 1940s, women were not allowed in court unless they were wearing a hat, a tradition that she again successfully challenged. She became a prominent speaker at a time when women giving after-dinner speeches was unusual. Women barristers were not allowed to attend bar mess dinners and even as judges were not able to go to judges’ dinners. After her death, she became the only High Court judge in history not leave a spouse’s pension; she died before changes in the law.

She was in demand on television and radio and attracted news coverage across the world. The media attention got her into conflict with the Bar Council because of the then strict rules forbidding advertising in any form. There are some interesting touches: Rose collected joke books which she annotated for use later. After the death of King George VI, barristers had to wear white mourning bands. I thought all bands were white but apparently during court mourning, judges and the bar folded bands several times to make vertical pleats. Now you know.

This is an interesting biography about a lady who overcame prejudice in several forms to build a remarkable career.