Should you pay a huge price for a principle? How do you fight back if a public body mistreats you? 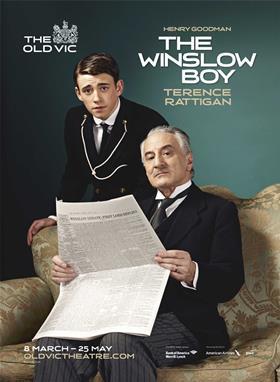 This excellent Terence Rattigan play, set in 1913 and written in 1945, raises these and other issues that are relevant today. Ronnie Winslow, a 14-year-old naval cadet, is expelled from naval college for stealing a five-shilling postal order. In one of the play’s best scenes he assures his father Arthur, a retired Edwardian bank worker, that he is innocent. His father and sister Catherine, a tenacious and charismatic suffragette, set out to clear his name. Longstanding family solicitor Desmond Curry and eminent barrister/peacock Sir Robert Morton KC are their legal team.

In different ways, they all pay a big price. Ronnie's mother Grace and brother Dickie, more doubtful about the whole venture, are caught in the crossfire. It’s in the style of a courtroom drama, which loses nothing for the fact that it never leaves the Winslow’s Kensington drawing room.

Henry Goodman is superb as Arthur, Ronnie's father, as, diminished and aged by the struggle he fights against the Admiralty. His Petition of Right to ‘let right be done’ is the only way, we are told, that the Crown could then be challenged in the courts. Ronnie (Charlie Rowe) handles the early scenes well; his shocked arrival from college and encounters with his father and barrister. Later he seems strangely detached, but maybe that’s the point. It’s not just about him.

Naomi Frederick seems timeless as Catherine the resolute suffragette, full of warmth for her little brother. She’d do really well in a modern law firm and reminded me of a number in ours. And I liked Peter Sullivan as Sir Robert, the cold-hearted barrister. His growing emotional commitment to the cause wins the audience over.

Others aren’t quite as convincing. Richard Teverson as Catherine’s fiancee John; how did feisty Catherine come to be engaged to this stuffed shirt? Feckless student Dickie (Nick Hendrix) and Wendy Nottingham, as the maid, both grated a little, but maybe that was just because they didn’t believe in the cause, as the audience we wanted them to. Ronnie’s mother Grace, played by Deborah Findlay, shows the conflict within her better as she challenges her husband. The events are based on the case of George Archer-Shee.

Maybe a bit too long, but always engrossing, the play, directed by Lindsay Posner, makes us question the sacrifices they make, not all of them through their own choice. Was it worth the court time and (on the arcane procedures of the period) parliamentary time as well, all over a five-shilling postal order? Or is the principle all-important, that a young boy had been treated unfairly by a powerful institution, and right needed to be done? Good questions, set out with drama and lightness of touch, and good answers too.

Of course, the introduction of legal aid, three years after the play’s first production, would have made it all so much easier.

Louis Manches is head of the property department at Manches