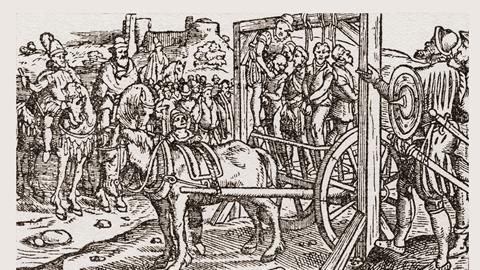 Crime and punishment in Tudor England

Durston, a barrister who has taught in law schools in England and Japan, warns the reader that, unlike continental Roman law countries that used and retained parchment and paper records, in England few criminal law written records exist for the early Tudor period. While there are major legal tracts from the Tudor era, the historian must also turn to letters and notebooks from Tudor JPs and chapbooks – pamphlets detailing notorious crimes. The advent of the printing press in England (1476) not only enabled the country to keep up to date with a plethora of new legislation, it also standardised the practice of criminal justice – much procedure was regulated by local custom and tradition.

Tudor England differed from continental nations in other ways too. In the late medieval period, England did not participate in the Reception of Roman (Civil) Law which replaced highly localised legal systems. Moreover, the administration of Tudor England was run by unpaid amateurs. Also ‘unusual in a European context’, adds Durston, was the death-for-felony rule, which the Tudor criminal justice system inherited from the medieval era. This rule was renowned for the ‘unvariegated nature of the punishment allotted for any serious crime’.

The author is entertaining on the origins of several well-known phrases: such as ‘caught red-handed’ or, in the immediate aftermath of a crime, ‘the hue and cry’. This was introduced by the 1285 Statute of Winchester which laid down that a felon might be pursued over a wider area.

One of the most chilling chapters concerns the peine forte et dure which involved being pressed to death by huge weights. Durston avers that this punishment was perhaps introduced to expedite the trial process. Another horrific punishment was imposed on poisoners during the reign of Henry VIII when they were ‘boyled to death’.

This is an accessible and readable survey of a ‘transitional’ era in which many major changes to the criminal justice system between 1485 and 1603 were ‘spontaneous’. 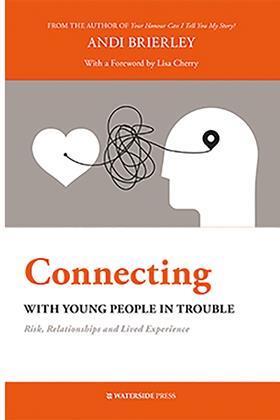 A youth justice specialist with 15 years’ experience of working with the most prolific, vulnerable and complex youngsters involved in offending behaviour, Andi Brierley delivers a powerful critique of existing youth services.

He explains why existing ways of dealing with children and adolescents can be counterproductive. From the everyday atmosphere of reporting arrangements, to preoccupation with risk-management processes, to the language used by professionals, Brierley invites us to reassess the consequences.