Thanks to the telegenic spectacle of small boats crammed with people trying to cross the channel, immigration has returned to the agenda for what, in a normal year, would be the news silly season.

In response, the home secretary is promising to slap a new 'fair borders bill' onto the palimpsest of immigration legislation that has piled up over the past 60 years.

Barrister Colin Yeo proposes a different approach. As Yeo is the proprietor of a blog called 'Free Movement' and a fully paid up member of what Priti Patel disparages as 'lefty lawyers', his end goal won't come as a surprise. But when he manages to park his ideological baggage - some long forgotten Tory politicians will be flattered by Yeo's descriptions of their influence - he makes a useful contribution to what should be a serious national debate. 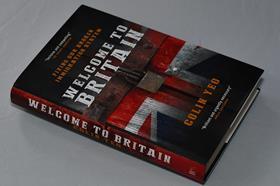 Welcome to Britain by Colin Yeo

The bulk of the book, a survey of injustices created by hasty and ill-drafted legislation will come as little surprise to Gazette readers. If the home secretary wants to know why immigration accounts for such a high proportion of JR applications, she would do well to start here.

As Yeo points out, it is not hard to find a racial element in legislation from the 1962 act onwards - though strangely the promoters of European-wide free movement, with its dramatic change to the ethnic composition of immigrants - are spared accusations of such bias. (Of course in the 1970s most observers thought the free movement would be of Britons towards the continent, Manuel from Fawlty Towers notwithstanding.)

He characterises the current UK concept of immigration as contractual - but with none of the fair dealing you would expect to find in a consensual contractual relationship. 'If this were a contract it would be the model of one we would expect to be struck down as unfair in the commercial courts,' he observes.

The solution? For immigrants to be thought of as citizens in waiting, rather than a resource to be exploited. This would require a fundamental rethink of the rights and responsibilities of citizenship, for native-born as well as immigrants. For example the quid pro quo for regularisation of illegal immigrants might be acceptance of a system of identity cards, he suggests.

Yeo shows little optimism about the current government. However in one sense, Welcome to Britain has already been overtaken by events: the government's announcement of a 'route to citizenship' to around 3m Hong Kong citizens with rights to British National Overseas passports will end one historic injustice. The expectation is that those who take up the offer will be the 21st century equivalent of the Ugandan Asians or - an unsung success story - the highly educated Iranian arrivals after the revolution of 1979.

Had this book been published a month or two later, Yeo might have been able to give this government - in which most of the great offices of state are held by descendents of recent immigrants - credit for this move, however much it might stick in his craw.