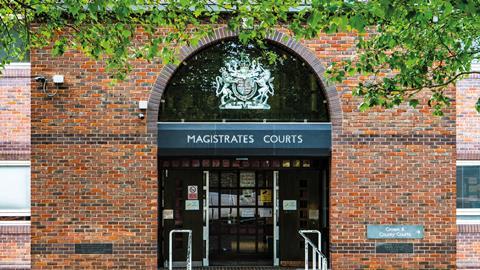 In the tradition of ‘The Secret’ authors, The Secret Magistrate kicks off with a daring revelation: that he or she disagrees with The Secret Barrister. At least, with TSB’s depiction of the lay magistracy as superannuated and out of touch.

Our anonymous beak sets the record straight with a vivid depiction of a year in the life of an inner city courthouse as the pandemic takes hold. (Like Pepys, TSM is lucky with timing.)

Solicitors will find little to surprise them in the snapshots of defendants with chaotic and frequently alcohol-addled lives being processed by a crumbling courts system, beset by delays, faulty infrastructure and morale-sapping economies such as the failure to supply unpaid magistrates with even a plate of biscuits (a recurring theme).

For all these constraints we get a picture of a magistracy that works hard to dispense as fair a shake as parliament will allow. Gone are the days of rubber-stamp sentencing according to the accused’s appearance and social standing, which I recall from my days as a newspaper court reporter.

Lawyers don’t always emerge as heroes, but few will find reasons to take umbrage. The judiciary, likewise: in fact I can see TSM becoming recommended reading for anyone considering applying for the bench. Even when we inevitably slip into political territory, TSM’s opinions are hardly controversial – court closures are a blow to local knowledge and have questionable efficiency gains. The unlamented criminal courts charge, as well as the complexities of the victim surcharge, also come in for a kicking: ‘Somebody quite evidently forgot, or, more likely ignored, that fines should always be linked to both means and the ability to pay.’

A final pertinent chapter considers the future of the magistracy after 650 years, including the need to recruit a broader spectrum of society to the bench. It is also time ‘to end any veiled hostility on our part towards district judges’. Overall, whatever The Secret Barrister thinks, the lay magistracy comes over as an institution that is worth preserving – and one that is owed a little more recognition and thanks. Is anyone up for founding a ‘Biscuits for the Beak’ campaign?

Michael Cross is news editor on the Law Society Gazette