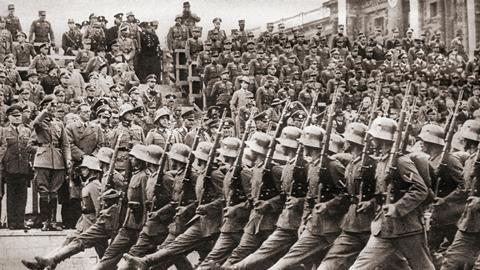 Nazi fugitive who died in the arms of a bishop

The Ratline: Love, Lies and Justice on the Trail of a Nazi Fugitive

Rome, 1949: Nazi fugitive Otto Wächter, indicted for ‘mass murder’, dies in the arms of a bishop, uttering a last-gasp revelation that he has been poisoned.

Wächter, the deputy in occupied Poland to governor general Hans Frank, who was hanged for the murder of millions, thus sparked an international whodunnit. Which country might have wanted him dead before he could escape from justice down the ‘Ratline’ used by Nazis fleeing Europe to South America?

This mystery piqued the interest of barrister Philippe Sands, whose grandfather Leon Buchholz’s family died in the Holocaust. Sands was accompanied on the forensics trail by Horst Wächter, the fourth son of Otto and Charlotte Wächter.

Sands sets down the components of Otto’s career. Following the Nazi takeover of Austria, he ‘was empowered to remove vast numbers of public officials from their posts, because they were Jewish or politically unreliable’. This was called Säuberungsaktion or ‘cleansing action’.

The scene switches to Kraków, where Otto became governor, ordering that Jews over the age of 12 should wear a blue Star of David on a white armband. And following the death of two German police officers, Otto reportedly attended the execution of about 50 men. He also authorised the construction of the Kraków ghetto.

However, Sands writes that Horst ‘wanted to find good in his father… He was unwilling to countenance the idea that Otto Wächter bore any real responsibility for terrible events that occurred on the territory he ruled’.

A love story emerges from the horror: Sands describes Otto’s relationship with Charlotte. Otto was transferred to head the military administration in northern Italy – ‘the liaison man between Hitler and Mussolini’s Republic of Salò’. On hearing that Kraków had fallen to the Red Army, Charlotte wrote that ‘our beautiful Reich is destroyed’. When Otto disappeared at the end of the war, Charlotte – with six children to look after – ‘described 1945 as the year of “The Collapse”’.

The Ratline is especially intriguing as to whether or not Otto was poisoned. The cause of death was put down as ‘acute liver atrophy, caused by internal poisoning’ and ‘Charlotte made no mention of any suspicious cause of death’.

As for the question of who might have targeted Otto, his main concern as someone indicted for Nazi ‘mass murder’ would have been avoiding discovery. The Americans would have arrested and tried him; with regard to the Soviets or Italian communists, ‘a targeted killing could [have been] possible’.

Sands writes with the same pacy momentum as in East West Street, in which he wrote about his grandfather, as well as Hersch Lauterpacht and Rafael Lemkin, who were responsible for putting the terms ‘crimes against humanity’ and ‘genocide’ into the Nuremberg trials.

Suffused with archival black and white photographs, this is another important familial history at the time of greatest peril.

Nicholas Goodman is a sub-editor on the Law Society Gazette