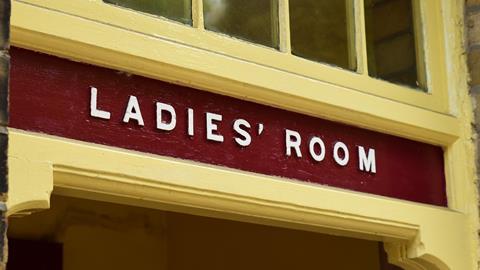 ‘One of them actually delivered a speech’

At the Old Bailey there is catering and ‘a large selection of daily papers in the Bar Mess… As a result the old Bailey Bar Mess is always busy, with a unique and excellent atmosphere’.

The language reads as somewhat dated, though it is in fact from the South Eastern Circuit’s current website. But in early 1923, with the first few women admitted to the Bar, its ‘unique and excellent atmosphere’ remained out of bounds for women. The Sex Disqualification (Removal) Act 1919 had not addressed the legal profession’s various canteens, bars and toilets on either of its two pages.

On 30 January 1923 the Bar Mess, the Solicitors Journal reported, ‘held a general meeting to consider the application of a woman for membership. There was no wish to exclude the lady in question, who is personally the most popular with her male colleagues of the new lady barristers; but unforeseen difficulties, arising from the nature of the Mess premises, had shown themselves in the way of admitting women to the Mess. It was therefore decided not at present to admit women; but the leaders of the Mess made it clear that no objection of any kind could be taken to women practitioners at the Old Bailey Bar, and no doubt, the City Lands Committee, who control the building, will provide robing rooms for the women.’ (The popular woman may have been Helena Normanton, who was counsel in her first Old Bailey case the following year.)

Did they mean toilets?

If so early women lawyers were already on the verge of greater success over at the Law Society. Earlier that year at a special general meeting of the Law Society Council on 26 January, London member Mr Percy Chambers asked: ‘Whether the Council intends to admit women as members of the Society on their being duly proposed and a payment of the usual fees, and if so, whether they proposed to provide them with suitable separate cloak-room and lavatory accommodation notwithstanding they have hitherto refused to grant such accommodation to the women students.’

He added: ‘That having regard to the fact that women have been admitted to the Society’s lectures and classes and to the students rooms since September, 1919, it is imperative that they should be provided with suitable separate cloakroom and lavatory accommodation without further delay and that the Council be required accordingly to take immediate steps for its suitable provision.’

The president replied in the affirmative, saying the Council ‘intend to provide them with suitable cloak-room and lavatory accommodation’. He noted that ‘a lady solicitor had been admitted a member of the Society that day’.

Let’s hope the lady solicitor remembered to use the loo before leaving home.

What about the students? It seems the best legal minds were on this one already: ‘With regard to the students, this matter had been receiving the consideration of a committee of the council for several weeks. Plans had been now passed which would entail a considerable amount of expense. These plans also related to altering the hat and cloak-room accommodation.’

The presence of women in spaces that had been traditionally all-male was a talking point, even if the talk vastly overstated their numbers. In its 1 September 1923 issue, the Solicitors Journal noted the impact of Bar students and married residents on the atmosphere of such spaces. Under the headline ‘Ladies and the Temple’ it noted: ‘There was a time within the memory of men now living when the presence of a woman in the Temple, other than a laundress or the wife of a porter, would have been regarded as little short of sacrilege… now they overrun it.’

Far from overrunning the place, women were excluded from some of its key clubs and societies. One was the Hardwicke Society, a Bar debating society which met every Friday. A rule change allowed women to join, but the society’s members could blackball nominees – one ‘back ball’ in 10 was needed to turn down a membership application.

The Hardwicke Society’s ‘Ladies’ Night’ debate, 11 April 1924, considered the motion ‘That in the opinion of this House woman is spoiling the world for women’. Women, Mr ML Gearese said, were making demands ‘for privileges without responsibility’, thereby degrading the institution of marriage.

Sir Ernest Wild, the Recorder for London, spoke against, but this was a debate with no female voices.

Opponents to the entry of women had in fact relented, and among themselves agreed not to blackball women’s membership. Women did then join – every woman proposed and seconded was elected, but this was a tactically timid entry. The women waited until ‘the heat of the struggle’ was forgotten before even taking their seats for a debate.

‘Last term,’ the Solicitors Journal reported on 6 September 1924, ‘one of them actually delivered a speech. The heavens did not fall down, nor did the floor yawn beneath one’s feet’. The speech in question ‘was fluent, lucid and eminently sensible – based on the speaker’s personal experience of social and political problems as a Government official’.

But how were the toilets progressing?

The Law Society’s grandly titled ‘Chancellor of the Exchequer’ Mr Hickley had good news at the Law Society’s AGM on 25 July. ‘The item “buildings and repairs” showed a heavy increase, but this was due to the adaptation of the Society’s buildings to the use of lady solicitors,’ Hickley said, adding his own rhetorical flourish: ‘Whether or no the fair sex would eventually take possession of the building and leave mere males to find accommodation elsewhere remained to be proved; but at the moment there did not seem any probability of such an event taking place during his term of office.’

When it came to spaces, clubs and plumbing the legal profession had been dragging its feet, but it was slowly changing.