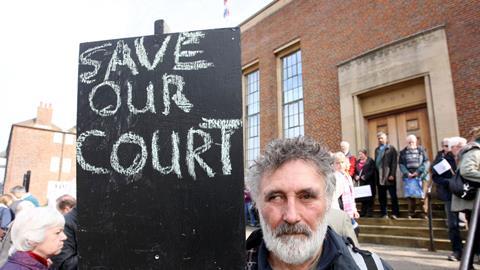 If a public building is a projection of power, intent and authority, the state of our courts says something deeply unsettling about the place of the rule of law in this country.

Across England and Wales accounts of the physical condition of the courts estate are lurid and authentic. Judges and other lawyers who use them have been frank with the Gazette. As one criminal practitioner puts it: ‘The damp which creeps through the plaster surrounding the royal court of arms above the Ipswich bench is a physical metaphor for the shambles we are in.’

There are offices closed by sewage leaks, case lists of impractical length and well-founded concerns about the courts’ ability to maintain security and be sensitive to the needs of vulnerable people.

The Ministry of Justice acknowledges that modernisation of the courts is urgent, and that the environment and technology must be made fit for purpose. The problem would seem to be with the planned route to the future.

Courts are being closed and case lists consolidated – not sent to best-in-class county courts, but surviving courtrooms whose physical conditions are remarkably similar to those that have shut.

To turn this situation around, it is essential that the £700m investment in court modernisation actually materialises. And proceeds of court sales must be reinvested in the fabric of those that remain, rather than be allowed to disappear into the Treasury’s coffers.