Kazakhstan offers an example of how English law can be used to promote UK interests overseas.

Following the discussion in the Gazette about international development secretary Priti Patel’s comments that ‘we have to make sure that our aid works in our national interest,’ I have come across a country where that is already happening – Kazakhstan, which I visited last week.

Investments in improving justice in that country have a direct effect on our national interest.

Before going, I knew next to nothing about Kazakhstan. But I find that the UK, from the Ministry of Justice downwards, is deeply involved in the reform of its justice sector. Interestingly, this includes a massive project on the reform of criminal justice funded by the EU, led by Northern Ireland Cooperation Overseas in partnership with the MoJ and others.

(The application for EU funding must have come about during the period when either Chris Grayling or Michael Gove, both ardent Brexiteers, were in charge of the department. They opted out of as much as possible regarding the EU during their terms as lord chancellor … other than the opportunity to spend the EU’s money.)

The UK’s national interest is involved here because the UK is one of the top five largest investors in Kazakhstan, mainly in oil, gas and mining, but also in a range of services (finance, health, education, architecture). As a result, the UK has an interest in protecting its investments through improving the legal system.

The most obvious way in which such improvement and consequent protection are taking place is through the construction of the Astana International Financial Centre (AIFC) in the capital, which the Kazakh government hopes will rival Dubai in due course. It will have independent courts with exclusive jurisdiction over AIFC participants.

Most importantly, there is this quote from the Kazakh president which leads the website: ‘I signed a decree on the establishment of the International Astana Financial Centre. It will be based on the principles of English law, the preferential tax regime and an independent financial court.’ 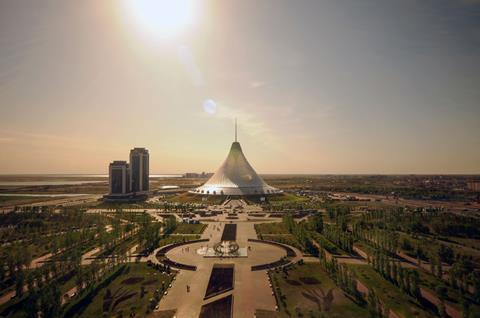 English law – that says it all. English experts will be involved in the training of local people to ensure the working of the courts, and the Kazakh government is already investing in this. At the conference at which I was speaking, focused on the challenges facing the legal profession, one of the local lawyers asked how they could possibly compete with English lawyers in future arbitrations.

The only answer is training by English lawyers and judges. Kazakhstan is already a relatively open country for legal services, having joined the World Trade Organisation a year ago with a broad commitment on legal services. There are foreign law firms operating there.

The Law Society and the bar are also involved. Earlier this year, the Law Society held an English Law Day Forum in Almaty. Not surprisingly, the speakers focused on the English law treatment of M&A transactions, capital markets, project finance and PPP, and international arbitration.

Then there was a roundtable on doing business in central Asia earlier this month, which covered the AIFC. The Bar Council led a delegation last year, and dealt with some of the same topics in sessions in Astana and Almaty on international arbitration and corporate governance.

While I was there, I was invited to a conference taking place next month, this time run by the Kazakh Ministry of Justice itself, on ‘The improvement of civil legislation of the Republic of Kazakhstan based on the implementation of English law provisions’, focusing on issues like the doctrine of estoppel, the interpretation of contracts, indemnity clauses and damages generally.

Who knew all this? And the UK’s involvement in the justice sector in Kazakhstan has been a long-term commitment, covering areas also outside commercial law and arbitration – for instance, projects on the prevention of torture, the abolition of the death penalty, prison reform and human rights.

It is a good thing that the UK is seen as not just promoting its commercial interests. This makes the EU-funded project I mentioned earlier, ‘Enhancing criminal justice in Kazakhstan’, a good counterweight. Of course, such projects will have to be funded by the UK taxpayer in the post-Brexit future.

The reason for Kazakhstan’s engagement with the UK is because of English law, which has been exported so successfully around the world, principally by English solicitors, and which is seen as providing a trustworthy legal infrastructure for investment.

So, Ms Patel, invest more in justice projects overseas, and you will see your dream of promoting the national interest come true at the same time.