Free press? 500 pages of law are just the start

A new edition of the journalists’ legal bible provides a snapshot of current media clashes with the law.

Just as police officers get younger and pop music more irritating, the ritual thud as the latest version of journalism’s legal bible arrives on my desk seems to come around more quickly with each edition. It’s not a subjective illusion. When I started out in newspapers, McNae's Essential Law for Journalists would be updated every four years or so, and a typical office copy might be a decade old. After all, the cases of accidentally libelled barrister Artemus Jones (1910) or the non-bigamous Camberwell resident Harold Newstead (1940) – absorbed by generations of trainee reporters – were still held to be relevant. 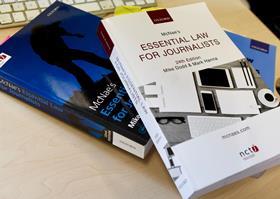 Indeed a decade passed between the first (1954) and second editions, for which the late Peter Carter-Ruck provided the chapters on defamation.

It's a bit different, these days. The latest (24th) edition of McNae’s (Oxford University Press, £22.99) arrived last week barely two years after its predecessor. Its preface notes that developments since the last edition include a High Court ruling on the attempt by Kensington and Chelsea council to bar reporters from a meeting following the Grenfell fire; a Court of Appeal fight over the right to identify two teenagers convicted of a double murder; a financial news service contesting an order to take down a story about an enforcement agency investigating a a business and newspapers winning the right to identify a prominent individual named in evidence in a court case.

Not to mention Sir Cliff Richard’s privacy action against the BBC, or Mr Justice Warby’s landmark rulling on the ‘serious harm’ test brought in by the Defamation Act 2013 – legislation that in itself is a significant recent change in the landscape.

Given all that, it’s a heroic achievement to keep the volume to 500 pages and an affordable price. (Though this was achieved only by relegating chapters on incitement of hate, Scottish law and terrorism to the internet.)

These aren’t the only changes. Back in the 1970s and 1980s, McNae’s job was simply to lay down the law on such matters as what could be reported from commital hearings. In 1990 a chapter appeared on ‘challenging the courts’, suggesting that journalists contest arbitrary reporting restrictions and the like. In the latest edition this has grown to 30 pages, with bullet points reminding journalists to remember and assert their rights, for example to contest restrictions imposed without notice.

However the volume still amounts to a menu of things that cannot be published, and a reminder why the UK slipped two places to rank 40th in the latest World Press Freedom Index.

Chapters on journalists’ sources ‘Be prepared to be watched or bugged’ and on the right to take photographs in public places are reminders that relations between the media and authorities are not always friendly. And yes, a seven-page chapter deals with ‘the risks of being charged with bribery, misconduct, hacking or intercepting’.

Of course most Gazette readers will regard a 500-page legal update every couple of years as very easy going indeed. And the idea that McNae’s provides the entirety of journalists' legal knowledge will confirm lawyers’ worst suspicions about the trade. But the point of Essential Law is in the title: it aims to provide only the absolute basics, whether you are a trainee reporter on the Barchester Bugle or the editor in chief of Sprocket Engineering International. And, in the days when everyone with a smartphone is potentially a journalist, it serves a useful function for bloggers and social media jockeys who can be bothered to read it. (A useful section deals with monitoring readers’ comments on the web.)

Solicitors pestered by relatives and friends for advice on what can be posted online might find it a useful present to hand out – and perhaps to read themselves if their knowledge of media law is a bit rusty, especially if considering sounding off on Twitter. But alas with the pace of developments in privacy case law alone, it may be less than two years before a further edition is required.