There has been public speculation that one of the reasons why Dominic Raab accepted becoming lord chancellor was to enable him to have another go at abolishing the 1998 Human Rights Act. Though he was a supporter of human rights in foreign countries in his time as foreign secretary, he has been opposed to our own Human Rights Act. His reasons are that the spread of rights has become contagious and has opened the door to large new categories of claim, which can be judicially enforced against the government through the courts. 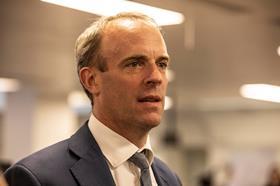 He is also in favour of reform of the European Court of Human Rights (ECtHR), and in the past wrote a pamphlet called Strasbourg in the Dock. Among its recommendations were that the 1998 Human Rights Act be amended to give parliament and our Supreme Court more power to resist the spread of case law from the ECtHR in Strasbourg.

My aim here is not to debate these ideas, which would require a very long document, but rather to highlight that both the European Convention on Human Rights (ECHR), and its enforcement mechanism, the ECtHR, have been great friends of lawyers’ rights over the years. And, before the jokes begin, they have protected lawyers’ rights like the sanctity of lawyer-client confidentiality, and not lawyers’ fees.

We are presumably not about to have another Brexit event, this time in relation to the ECHR. First, the Trade and Cooperation Agreement between the UK and the EU mentions respect for the fundamental rights contained in the ECHR as an underpinning of the agreement at various points, either implicitly or explicitly. And, maybe more importantly, the Good Friday Agreement provides that the ECHR has to be enforceable in Northern Ireland.

Theresa May used to be in favour of withdrawal from the ECHR, but there is no sign that this is current government policy. Yet we may see attempts to modify the extent and enforceability of the ECHR. If so, we have been here before, where opening arguments about British laws being enforced in British courts led to total withdrawal from the institution concerned.

Before the debate begins properly, it is as well that we understand what a bulwark the ECtHR has been for our rights as lawyers. A recent report from the Council of Europe (CoE), called Feasibility study on a new, binding or non-binding, European legal instrument on the profession of lawyer – possible added-value and effectiveness by Jeremy McBride QC, listed the ECHR rights which protect lawyers: the right to life, the prohibition of torture and inhuman and degrading treatment, and the rights to liberty and security, fair trial, respect for private life, home and correspondence, freedom of expression, and freedom of assembly and association.

It is worth noting that none of these specifically mentions the rights of lawyers. Rather, more general rights have been interpreted as covering lawyers’ activities.

The CoE report separates lawyers’ rights into the following categories: harassment, threats and attacks; direct interference with professional responsibilities; inappropriate use of admission, disciplinary and other legal processes; and institutional shortcomings (relating principally to independence of the profession). Over 20 pages are dedicated to a detailed description of the jurisprudence and the protections it provides.

Before anyone concludes that the protections help only lawyers in more benighted jurisdictions, there are eight reported cases brought against the UK for alleged breaches of lawyers’ rights. These include one in the gravest category, relating to the assassination of a solicitor in Northern Ireland (Finucane v UK, no. 29178/95, 1 July 2003, concerning the killing of a solicitor alleged to have occurred in circumstances giving rise to suspicions of collusion of the security forces with his killers).

The CoE, as the umbrella body for the ECHR and ECtHR, is going even further at the moment in its attempt to protect lawyers. It will soon start drafting a new European instrument on the profession of lawyer to give greater strength to existing protections. The work is teed up to begin next year, with continuing discussions about who it will cover (non-lawyer human rights defenders as well?) and how it will be enforced (binding or not?).

The CoE undertakes other work of use to the profession, too, for instance in its guidelines on online dispute resolution mechanisms or electronic evidence in civil proceedings.

The new lord chancellor may be fully in favour of all the protections for lawyers under the ECHR and the future instrument. But a future charter of British rights is unlikely to cover lawyers’ rights specifically. There may, therefore, be unintended consequences to any new campaign. Put at its bluntest, it would be a shame if a holiday at a luxury hotel in Crete while Kabul fell led in due course to our profession having fewer avenues of recourse, and fewer protections, for our rights.