What were the most important legal developments of the past 30 years?

Can you guess which lord chancellor was the last to use the word ‘verily’ on radio? The answer, I can say with some confidence, is Lord Hailsham – who uttered the archaic adverb in a speech to the Magistrates’ Association almost 30 years ago. We ran an extract from his speech in the first edition of Law in Action, which I presented on 14 October 1984.

For the anniversary edition, which Radio 4 will be broadcasting on 14 October, I shall be asking three distinguished legal figures to nominate the most important legal development in the UK over the past three decades. We shall then take a vote.

The aim of Law in Action remains unchanged. We still explain recent legal developments to people with no specialist knowledge of the law. But our style has become more informal as our techniques have improved. We get out more and listeners no longer hear the tube trains rumbling just below the sub-basement studio that we used to use.

Everyone has now become more media-savvy. We interview serving judges, something that was simply not allowed 30 years ago. It was in 1984, as I recall, that the lord chancellor’s department acquired its first press officer and solicitors were first allowed to advertise their services. But it was all very low-key: the senior solicitor I interviewed on our first programme told me I could name him – but not his firm.

To remind myself of how the law sounded in 1984, I recently spent a self-indulgent half-hour listening to our launch edition. I should say immediately that I took a career break of nearly 25 years in the middle of the run.

Lord Hailsham really did sound like a dinosaur in his speech to the magistrates. ‘There is, I verily believe, no people’s court on either side of the iron curtain,’ he told them, ‘which is as representative of the responsible elements in society as the lay bench in England and Wales.’ Hailsham’s implication that the magistracy’s less well represented minorities were not ‘responsible elements’ gave us plenty to talk about.

And his reference to the iron curtain was not as anachronistic as it sounds: it was another five years before the Berlin Wall fell. 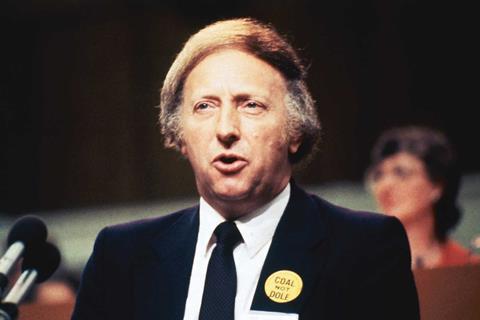 But the biggest legal story during our first few months was the miners’ strike of 1984/85. This year-long dispute was the last occasion in which the survival of a government was threatened by industrial action. And the strike itself was fought almost as bitterly in the law courts as it was on the picket lines.

Gavin Millar, then a young employment lawyer and now a leading QC, expressed the view in the first interview we broadcast that a divisional court headed by Lord Lane had been wrong to uphold a ban on secondary picketing. We also considered how the Queen’s Remembrancer might have enforced a fine of £1,000 for contempt of court that had just been imposed on Arthur Scargill (pictured left); frustratingly for the miners’ leader, it was later paid by an anonymous well-wisher.

But nobody paid the much larger fine imposed on the mineworkers’ union itself and mysterious figures called sequestrators were appointed to hunt down the union’s assets.

Asked on the first Law in Action about the unions’ legal challenge, Professor Jeffrey Jowell correctly predicted the law lords’ subsequent ruling: that although prerogative powers – which Thatcher had used – were not immune from judicial review, the courts would not interfere with the prime minister’s conclusion that national security requirements outweighed the need for prior consultation with the unions.

Trade unions have certainly declined in power over the past 30 years. But I don’t suppose that would be regarded as the most important legal development since 1984. So what should we choose? The decline in legal aid? Freedom of information? The growth in information technology? The expansion of surveillance powers?

Might it be the launch of the Crown Prosecution Service in 1986? The miscarriages of justice that came to light between 1989 and 1992? The devolution of law-making powers to Scotland, Wales and Northern Ireland? Independence for Scotland, if it happens? Or perhaps the growth of the EU (10 countries in 1984; 28 now).

For me, there are two main contenders. One is the Human Rights Act 1998, which looks as if it will dominate the forthcoming election campaign.

The other is the process of constitutional reform launched by Tony Blair in 2003. That, of course, reduced the role of the lord chancellor, increased the powers and responsibilities of the judges and led to the creation of the Supreme Court.

So which would you choose?