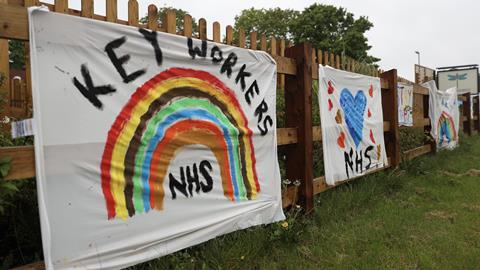 My favourite moment of lockdown so far was during the Thursday evening clap, when my neighbour came rushing out of her house to tell us we’d started too early and had to stop. The spirit of love and gratitude was slightly soured by an angry woman walking down the street shouting ‘it’s not bloody 8 o’clock yet!’

The stock of NHS workers has rarely been higher, as we realise the sacrifices these people make – often for risible salaries – to keep us ticking over. One can only hope the well-meaning weekly clap is translated into tangible better pay and conditions once this crisis blows over.

But the NHS is not above reproach. Mistakes are made, sometimes catastrophically, because of negligence or a malfunctioning health service. For all the genuinely warm sentiment to people working on the frontline, this doesn’t give a free pass when it comes to needless errors which injure people in their care.

But there is a developing school of thought during this lockdown that the goalposts for clinical negligence are shifting. Those who have long wanted a clampdown on claimant costs (though rarely, for some reason, defendants) see this as an opportunity to hammer home the point. The new battle line is emerging: these NHS workers are heroes, so woe betide anyone suing them.

Martin Samuel, writing in the Mail Online last week, made the point that taking legal action against the NHS was a funny way to show our affection for it, asking: ‘If Britain loves its NHS so much, how come we sue it for billions every year?’

Samuel said the steady growth in litigation over many years spoke of an opportunist culture, driven by elements of the legal profession. And yes, he wheeled out the ‘ambulance chasing’ line.

The most obvious response is that people never choose to sue the NHS – indeed they never chose to be injured in the first place. Questioning claimants’ love of the NHS is offensive to those needing compensation to live any sort of life – those I’ve spoken to in the past have told me they felt awful depriving the NHS of vital funds and tried everything to avoid doing it. It doesn’t matter how much you love the NHS, that won’t make your catastrophic injuries any less catastrophic.

Samuel repeats the misconception that NHS staff ‘can’t tell the truth, because you’ll get sued’. Ironically it’s exactly this lack of candour that means legal costs escalate so quickly.

Another line being wheeled out is that lawyers will see coronavirus as an opportunity to sue hospitals making desperately difficult decisions under extreme pressure. There is no evidence so suggest this will be the case. Indeed, the law should protect hardworking doctors operating in an environment where they do not have a great deal of experience.

You can love the NHS and still require compensation from it. We shouldn’t be guilt-tripping people who need to make a claim to have any chance of a decent quality of life.