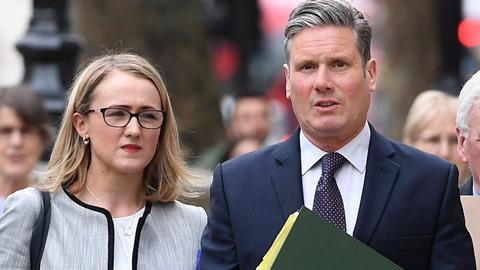 The joke going round about the Labour leadership contest goes something like this.

A battered and bruised Labour Party needs to win back grass roots and working class support, so they can’t possibly choose a fancy human rights lawyer from London like Sir Keir Starmer.

Instead, the preferred choice should be Rebecca Long-Bailey, who is a fancy corporate lawyer from Cheshire. Oh, and perhaps even elect another lawyer, Richard Burgon, as deputy leader.

Curiously, both would-be leaders could view their legal past as both help and hindrance to their campaigns.

Starmer needs to distance himself from the tag of yet another member of the north London metropolitan elite. A stellar record as a human rights lawyer will impress many in that parish, but it’s not quite the ‘man of the people’ vibe that Labour are looking for.

Equally, portraying himself as a figure with gravitas and experience could be just the ticket for taking on a prime minister big on bombast but sketchy on detail. It was noticeable that Starmer’s ‘this is me’ video pitch made constant references to his legal career and to representing the underdog, both as a barrister and director of public prosecutions.

In contrast, if it wasn’t for a LinkedIn profile that doesn’t appear to have been updated for years (unless she really is still a healthcare contracts solicitor at Hill Dickinson), you would barely know Long-Bailey was a lawyer at all.

She doesn’t mention it in her Twitter profile and makes no reference in her opening pitch for the leadership, describing herself as a lifelong socialist and ‘as likely to see me on a picket line as you are at the dispatch box’.

Is this intentional? I would make the argument that Long-Bailey would benefit from showing she has a professional background and is not just a conveyor belt politician.

But clearly the calculation is that she benefits from not talking up her time as a solicitor as she differentiates herself from the out-of-touch lawyer.

Perhaps there is one other malign force at play here: professional snobbery. Her people may fear some members of the public will regard barrister Starmer as a ‘proper’ lawyer as opposed to the pen-pushing solicitor Long-Bailey. Misguided as this sentiment is, I’ve met plenty outside the profession who still believe it, and the thinking might be there’s nothing to gain from highlighting an area where Starmer is perceived as stronger.

It will be fascinating to see how the legal credentials of both candidates are talked up or down in the coming weeks. If I were Long-Bailey I’d be proud of my (albeit brief) career as a solicitor. After all, the last time Labour chose a lawyer as leader they went on to win three elections.