Will Lord Sumption’s Reith lectures be aimed at Lord Hoffmann?

Lord Sumption’s Reith lectures on Radio 4 next year should prove fascinating. The soon-to-retire Supreme Court justice will argue that politicians have surrendered ground to the courts without always reflecting on the wider implications. In his view, the BBC tells us, judges have found themselves making decisions in areas that should be settled through the normal course of politics.

Which decisions will Sumption rely on? Not the Miller case, when he and most of his fellow justices decided that the power to trigger Brexit belonged to parliament rather than to ministers (and still less to the courts).

How about Steinfeld and Keidan, in which the Supreme Court decided that preventing opposite-sex couples from registering civil partnerships was a breach of their human rights? Or McLaughlin, where the court found no objective justification for the government’s refusal to pay an unmarried woman a widowed parent’s allowance?

All that the courts did in those cases was to declare the existing law incompatible with the human rights convention. That merely sends a message to the government that, in a court’s view, the law needs to be changed. Sometimes the message is heeded quickly: the prime minister has already announced that civil partnerships will be extended to opposite-sex couples. Sometimes it is not. But changing the law remains a decision for parliament.

Perhaps Sumption is thinking of broader social issues. On divorce, though, his colleague Lady Hale said that it was not for the courts to change the law. Refusing Tini Owens a divorce based on her husband’s behaviour, the Supreme Court president said in July that the judges’ role was ‘only to interpret and apply the law that parliament has given us’. The government took the hint last month and proposed reforms.

In June, the Court of Appeal refused to declare the law banning assisted suicide incompatible with the human rights convention. Dismissing an appeal by Noel Conway, three senior judges said the approach of the divisional court – that parliament was better placed than the courts to assess the impact of changing the law – could not be faulted. In the earlier case of Nicklinson, decided in 2014, the Supreme Court justices, including Sumption, had been virtually unanimous in agreeing that parliament was a more appropriate forum than the courts for resolving this issue.

Of course, the Supreme Court sometimes overturns decisions taken by ministers who exercise powers granted by parliament. In the Unison case last year, seven justices decided that it had been unlawful for the government to increase employment tribunal fees from nil to as much as £1,200. In 2015, the Supreme Court overturned the attorney general’s veto on publication of letters written by the Prince of Wales to government ministers.

But I suspect Sumption’s real beef is with the European Court of Human Rights. In 2013, he drew attention to the way that court has developed article 8 of the convention, which protects private and family life. 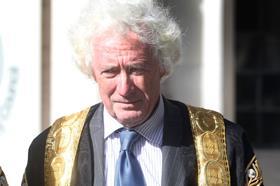 ‘This perfectly straightforward provision was originally devised as a protection against the surveillance state by totalitarian governments,’ Sumption told an audience in Kuala Lumpur. ‘But in the hands of the Strasbourg court it has been extended to cover the legal status of illegitimate children, immigration and deportation, extradition, aspects of criminal sentencing, abortion, homosexuality, assisted suicide, child abduction, the law of landlord and tenant, and a great deal else besides.’

Many of the issues decided by the human rights court were political rather than legal, Sumption argued. The court’s approach gave rise to a ‘significant democratic deficit in some important areas of social policy’.

But that drew a riposte a year later from Lord Dyson, who was then head of civil justice. States that signed up to the human rights convention must have intended the Strasbourg court to fill in the gaps, Dyson argued. Our judges continued to perform their vital historic role of developing the common law, making changes incrementally in response to changing social conditions, values and ideas.

What I am really hoping is that Sumption will respond to Lord Hoffmann, the former law lord. Last year, in a lecture now reprinted in the latest UK Supreme Court Yearbook, Sumption accused Hoffmann of having rewritten the principles of judicial interpretation a decade ago. On this view, contracts no longer meant what they said; they meant what reasonable people would have thought.

Hoffmann hits back in the current Law Quarterly Review, accusing Sumption of going back to the ‘dark ages of word magic, of irrebuttable presumptions by which the intentions of a user of language are stretched, truncated or otherwise mangled… even when it is obvious that it was not the meaning the author… could have intended’.

The Reith lectures are recorded in front of an audience. I do hope Hoffmann will be there to ask Sumption what he means.