Being open and honest about my identity – who I am and where I am from – has been central to shaping my professional life. 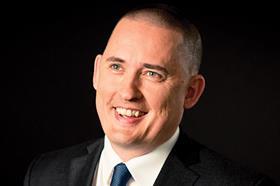 At my first partners’ conference after taking on the role of CEO, I shared my back story with the whole partnership, under the title 'This is me'.

Subsequently, I repeated the same talk with all employees as part of various employee conferences across our global network.

Whilst I was self-conscious about talking about myself, I felt it was important that our people could put me in context and understand where I was coming from when I would later speak about topics which are important to me – such as access to the profession – rather than making assumptions based on the way I look or talk.

My background is a little unusual for the CEO of an international law firm. I come from a rural village in Wales, where I attended the local state school.

At home we spoke Welsh, and the same at school, so English is my second language. One grandfather was originally a miner, and another a farmer, and despite being one of twelve grandchildren, I remain the only one to have gone to university – and none of my family are lawyers. I am also openly gay.

That said, I was a bit of a late developer and only accepted that I was gay at the age of 28. Once I had effectively come out to myself, I made a conscious decision to bring my full self to work.

I know it’s something that many young professionals continue to worry about revealing, for fear of being seen as different, or that it will limit their career in some way.

My career has not always taken the most conventional route. After studying at Bristol University, I decided not to join a magic circle firm, but rather accepted a training contract at Gouldens, a smaller City-based outfit.

After eight years, I walked away from practising law completely. I wanted to try something else, something new – and for two years I did just that. My adventures included a stint teaching the LPC at the College of Law (I admit I don’t have the patience to be a teacher!), and I came close to setting up a B&B in Berlin, before I fell in love with Julian, now my husband of 15 years, and he wanted to stay in London.

I then decided, having realised how much I missed the challenge and buzz of a law firm environment, to go back to being a lawyer in the City.

I have never experienced discrimination in my career, in fact I strongly believe that being open about who I am has helped me build my team and my practice across the years.

Being yourself and being authentic is so important to both colleagues and clients. My old intellectual property team know my husband Julian very well, having been round to our house many times.

Similarly, my clients also know Julian, and he has joined me at various international conferences over the years. At the end of the day, both colleagues and clients choose you because of the person you are – all of you, not just the legal part.

I’ve not always got it right; I once delayed telling a close client that I was gay because I thought, based on his background, that he would not respond well. When I did eventually tell him, he was hurt that I hadn’t felt comfortable telling him sooner and that I had made prejudicial assumptions about him because of his background.

That is not to say the world is perfect and there have been some silly comments across the years – for example, 'I didn’t think gay people liked rugby' (tell that to my hero, Gareth Thomas!), but people make silly comments about most things, especially in the pub.

Also, it is a misconception that you only come out once. By default people assume you’re straight. I have therefore had to ‘come out’ numerous times over the years, and still do when I meet new people.

But I know that it is important for me to do so because honesty and trust – whether with clients or colleagues – are vital components of every healthy working relationship.

I’m pleased to say that things have changed for the better over the last 20 years, since I was 28; it certainly feels like the importance and value of diversity and inclusion is captured in the zeitgeist.

We’ve come a long way with breaking down many of these invisible barriers and misunderstandings, but there is still a lot to be done – particularly in terms of diversity and widening access to the legal profession. I am confident that virtually nobody will bat an eyelid about young (or older) lawyers being openly gay in a law firm. I am also pleased to say that I am not unique: I know of a number of other openly gay people in senior leadership roles at Stephenson Harwood and in other international law firms.

I truly believe that diversity in all its forms is a strength, not a weakness. And for businesses it brings new perspectives, experiences and ideas. I know that my experiences of feeling like the ‘outsider’ – whether in terms of my background, being gay or walking away from the profession to do something else for a few years – have shaped me and been valuable in making me the lawyer, and CEO, I am today.

I firmly believe that, irrespective of where you come from, who your family are, your educational background or who you love, you should never accept any limitations on what is achievable in life. I will leave it to the words of a literary genius, Oscar Wilde, to say, 'Be yourself; everyone else is already taken.'

Eifion Morris is the chief executive of Stephenson Harwood LLP

Share your experiences as LGBT+ lawyers and allies in the workplace

The Law Society are keen to better understand the experiences of LGBT+ lawyers to improve engagement and support across the profession. If you are a member of the LGBT+ community, or an ally, please take 5 minutes to complete this survey and share your thoughts.