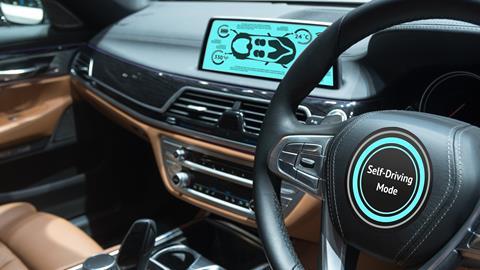 You’re guaranteed one on every motorway journey. The (usually expensive-looking) saloon or 4WD cruising along the middle lane at 60 mph. Serenely oblivious to everyone else on the road - especially to the clump of vehicles stacking up behind their left shoulder while successive drivers contemplate two lane changes or an illegal undertake.

On-the-spot fines were introduced for such road hogging in 2013, but if anything the problem seems to have worsened since then.

The manifest inability of humans to comply with safe driving behaviour should be remembered every time we dismiss self-driving cars as a technocratic fantasy. Despite repeated cycles of hype and disillusionment, they are steadily coming closer to reality. The government is currently considering how the UK can adopt internationally agreed standards for a technology that will allow drivers to cede control to artificial intelligence, albeit in limited circumstances, in the very near future.

Alas the technology envisaged will do little to prevent middle-lane hogging. But it could do much to reduce frustration - and accidents - in slow moving queues of motorway traffic. The government has opened a consulation on automated lane keeping system (ALKS) technology, smart systems designed to control the lateral and longitudinal movement of a vehicle for extended periods at speeds of up to 60 kilometres per hour (37mph). System requirements for ALKS on motorways are set out in a new UN Economic Committee for Europe (UNECE) Regulation expected to come into force early next year.

As can be imagined, the requirements include a formidable set of measures to ensure a safe transition from human to automated control, and back again. These include a succession of audible and tactile alerts for drivers to resume control, and for bringing the vehicle to a halt in a 'minimum risk manoeuvre' when something goes wrong.

Gazette readers will already have spotted a myriad of potential legal complications, especially around liability for accidents. But the consultation document notes that the introduction of ALKS could be underpinned by the Automated and Electric Vehicles Act 2018, which ensures that victims of a collision involving an automated vehicle will receive compensation from the vehicle's insurer in the same way as they would from the insurer of a conventional vehicle.

However the consultation concedes that secondary legislative amendments and changes to the Highway Code are needed to ensure ALKS can be safely used. It poses a formidable set of questions, ranging from driver education to accessing data for accident investigations to how the systems should detect and respond to instructions from emergency vehicles. Crucially, it asks: should the driver be allowed to do things like watch television while ALKS is engaged?

These are complex questions, but the challenges are not unprecedented. AI technology is improving all the time and systems like automated parking are already standard in many models (not in my old banger). Systems can be introduced in stages, as the technology and human adaptation to it matures. Lane-keeping in slow-moving motorway traffic seems a sensible early deployment.

In his interesting new book The Reasonable Robot*, law professor Ryan Abbott predicts that self-driving cars will eventually become 1,000 times safer than the best human driver. This has profound implications for accident liability - at some point courts may find it is unreasonable for a human to insist on taking the wheel. Certainly insurance premiums will reflect the greater risk of human fallibility.

Of course we're nowhere near that point yet, but we shouldn't put unnecessary barriers in the way. Let us instead ask ourselves, if someone invented the motor car today, would we dream of putting such an unguided missile in the hands of fallible human beings?