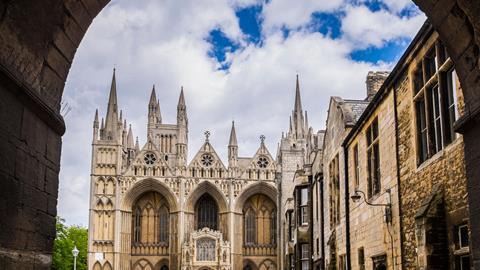 Nightingale courts are like taking a bucket to a house fire

You can get a sense of the government’s commitment to tackling the crisis in our justice system by the name given to the 10 pop-up courts.

Of course, ‘Nightingale’ is shorthand for a temporary structure designed to deal with the fallout from coronavirus. Perhaps the public will understand the issue better by using her name. But would it have been so difficult to come up with a law-related name? The lord chancellor's own suggestion of Blackstone courts seems to have been shot down, but the history of law has plenty of other heroes.

The comparison between Nightingale hospitals and Nightingale courts is also misleading in another way. The hospitals were a sensible and proactive attempt to get ready for the potentially catastrophic effects of the pandemic.

These courts are addressing a problem which has long since made its way to these shores. The backlog in the magistrates’ court is up to half a million, with more than 40,000 cases waiting to move to the Crown court. The government closed almost 300 courts between 2010 and 2019 because they wanted to transfer the work elsewhere. The list of 10 Nightingale courts include Telford County Court and Fleetwood Magistrates’ Court, both deemed surplus to requirements in the past three years but now part of the rescue package (the reality is these were among those the Ministry of Justice could not yet flog and just so happened to still be available).

The simple truth is that these courts are a nice headline-grabber (hosting one at Peterborough Cathedral is a particularly nice touch) but they are like taking a bucket of water to a house fire. There are obvious geographical shortfalls – East Anglia and the East Midlands are not yet covered, while the magistrates’ court at Fleetwood will presumably struggle to cover the entirety of work required across the entire north west. The MoJ was keen to point out Chichester will be the first emergency court to open, but less inclined to note that it closed the city’s purpose-built combined court just a couple of years ago. The proposed ‘Nightingale’ in Chichester is in reality not new, but instead an extension of the alternative venue already being used since the court closure.

As noted by Gazette columnist Joshua Rozenberg, the venues themselves are limited: just three (Swansea, London and Peterborough) will handle non-custodial crime, while four will be available for family cases. This is a justice system where half the entire court estate was closed in March, and those premises that stayed open operated a threadbare service.

While the Nightingale hospitals were built within two weeks, the Ministry of Justice response has taken almost four months to rehash a couple of existing courts and open a handful of new ones in public buildings. Robert Buckland said back in June that 200 extra sites would be required to deal with the backlog: clearly there will be more than the 10 announced in due course, but this first wave has taken too long and has been underwhelming when it came. There appears to be no grand thinking to handle this crisis, no lofty ambition, and crucially very limited funding.

To be clear: temporary courts are a good idea. Finding existing public spaces which can be used for court facilities is a good idea. Most lawyers welcome the principle here. But what we have so far was barely worth the coverage it received.

Florence Nightingale, the lady with the lamp, would probably be a little embarrassed as well as confused to put her name to this token effort so far. The lights went out long ago on the justice system, and her eponymous courts leave us mostly in darkness. The Nightingale hospitals were intended to cope with a potential influx of patients. The courts will open with queues already snaking for miles outside.