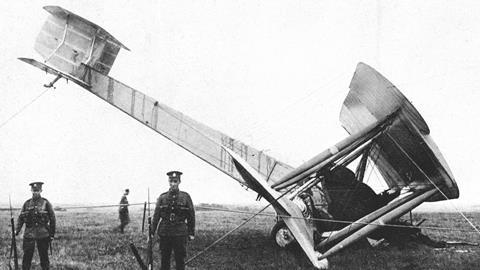 No lifejacket under your seat: 100 years of aviation law

'The only articles missing were some life-saving suits, which we were expecting from the United States,’ Arthur Whitten Brown recalled. Safety checklist completed, he and pilot John Alcock climbed into their open-cockpit Vickers Vimy bomber anyway, and took off into the teeth of a Newfoundland gale to try and become the first to fly the Atlantic non-stop. It was 14 June 1919.

A casual attitude to emergency equipment was apiece with the times. In the event of a ditching into the grey North Atlantic, Alcock and Brown's plan was to extract an emergency ration pack from the aircraft’s tail - reckoned to be the last section to sink - clamber onto an auxillary fuel tank built in the shape of a boat, and pray for a passing ship.

Yet for all the barnstorming derring-do, 1919 also marked the dawn of an age of international regulation of aviation which, despite political crises and colossal technological advances, remains in place today. It was hammered out as a sideshow to the Paris peace conference that was remaking the international order after the First World War. Later on that year the Solicitors' Journal and Weekly Reporter recorded that the International Aerial Commission had found a way of reconciling the freedom of aerial navigation with the principle of each state's sovereignty in the air above its territory. This gave flyers the right to cross a foreign state, subject to the right of the state crossed to apply its local rules, which might include a requirement to make a landing.

Broadly speaking, those principles - amplifed by the Chicago Convention of December 1944, under which 52 states ‘agreed on certain principles and arrangements in order that international civil aviation may be developed in a safe and orderly manner and that international air transport services may be established on the basis of equality of opportunity and operated soundly and economically’, remain in place today.

Of course nowadays the rules have rather more to say on trans-oceanic flights than would have seemed necessary in 1919. Thanks to a combination of luck and superlative airmanship and navigation, Alcock and Brown made it, making a tail-up landing 16 hours later in a Connemara field which turned out to be a bog. If you fly the Atlantic in a UK-crewed aircraft this summer, you may hear a tribute from the flight deck. (We Brits have a chip on our shoulder about Americans believing Charles Lindbergh's 1927 flight was the first transatlantic non-stop.)

Brown's published recollection* is a stiff-upper-lip account of a terrifying trip: 'The early evening was by no means dull. Just after six the starboard engine startled us with a loud, rhythmic chattering, rather like the noise of machine-gun fire at close quarters'. (This was no casual metaphor: the Royal Flying Corps veteran knew exactly what machine-gun fire sounded like at close quarters.) The engine was licking flame over one of the wing's cross-bracing wires. 'I was far from comfortable,' Brown admitted.

Later, in the small hours, a fog bank deprived the crew or any sense of up or down, with the inevitable consequence. 'The machine hung motionless for a second, after which it heeled over and fell into what was either a spinning nose-dive, or a very steep spiral.’ Alcock recovered less than 100 feet from the sea. It's perhaps worth noting that such spatial disorientation, in a more airworthy and vastly better instrumented monoplane, almost certainly claimed the life of a pilot and his Premier League footballer passenger off the Channel Islands earlier this year.

Meanwhile navigator Brown kept the flight on track, navigating with deduced 'dead' reckoning and occasional sextant star-sighting, with a spirit-level standing in for an invisible horizon, communicating course adjustments to Alcock with gestures and scribbled notes.

Alcock and Brown's flight earned them knighthoods. It also led to a couple of discoveries. One was what we now call jetlag: In Ireland Brown was startled to feel disoriented getting up in the morning after a nine-hour sleep: 'sub-conscious suggested that it was but 3:30 am'. He went on to predict: ‘This difficulty of adjustment to the sudden change in time lasted for several days. Probably it will be experienced by all passengers traveling on the rapid trans-ocean air services of the future.'

Brown also recognised that the technical achievement of flying the Atlantic was only the first step to the air age. 'The airways of the world offer some pretty problems of international politics, involving commerce, rights of landing, customs duties, air smuggling, air traffic regulations and air laws.' He lived long enough to see those problems tackled by international convention - unlike Alcock,  whose luck ran out in December 1919, ferrying a new Vickers machine to the Paris Air Show.

In 1920, Brown predicted: ‘If people, their communications and their goods can be taken from continent to continent as quickly, or nearly as quickly, as a cablegram, the twin evils of state parochialism and international misunderstanding will less often be dragged from the cupboard in which the world’s racial skeletons are kept.

'The airship and the aeroplane may well become a greater influence towards internationalisation than the signed covenant of the League of Nations.’ A century on, it's hard to disagree.