‘Better regulation’ may be a clever political ploy, but is it good for Europe?

There has been little or no coverage in the UK press about one of the most significant recent EU changes. Ever since Jean-Claude Juncker took over as commission president, the amount of legislation coming out of Brussels has shrunk.

The usual statistic cited is that at the height of the economic crisis there were more than 300 pieces of legislation, but only 23 are promised for this year. The planned rate of legislation for 2015 has been deliberately shrunk by 75%. Both the ‘yes’ and ‘no’ campaign in the forthcoming referendum have an interest in highlighting this, but there is a strange silence, as if we are fighting over an identity no longer related to reality.

It is not that the EU has nothing to do. It is crushed under the weight of urgent issues – Greece and the euro, mass migration, Ukraine, TTIP, data protection, a possible Brexit – but it is not intending to pass rafts of new legislation with the aim of harmonisation or convergence of member states’ legal systems. This has caused the European parliament to grumble that it has nothing to do. It is also shrinking the portfolios of lobbyists, and will in due course stabilise and reduce the areas of new EU law in which lawyers are trained.

There is a catchphrase to accompany the drop in legislative activity: better regulation, to ensure an improvement in law-making. The better regulation campaign is led by the second most powerful man in the Juncker commission, vice-president Frans Timmermans (pictured) from the Netherlands, who is also expected to lead the renegotiations with the UK. Timmermans has experience of Eurosceptics – 10 years ago Dutch voters rejected a new EU treaty that he had helped negotiate.

Better regulation (with its accompanying drop in law-making) is aimed at Eurosceptics everywhere in Europe. Indeed, it is sold on the commission website as a direct response to last year’s European election results: ‘The 2014 European elections showed that many citizens are concerned with what they perceive as an undesirable level of EU involvement in their daily lives.’ So, in today’s climate, who could object? 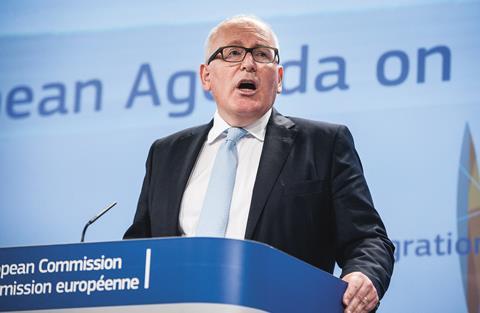 Well, a few are objecting. They fear that better regulation will mean less regulation for businesses, and consequently a worse deal for citizens, whether as workers or consumers, and for the environment. The other two EU institutions, parliament and council, fear the commission is making a power-grab in deciding what laws or amendments to laws should go forward. The commission foresaw these criticisms and specifically denied them in its programme launch. Yet it is difficult to see how necessary cross-border protections across the wide spectrum dealt with by the commission – energy, trade, agriculture, fisheries and justice – can be crammed into such a reduced legislative workload.

What does it mean for lawyers? At present the basic texts read like so much management-style mumbo-jumbo, since better regulation is principally a political initiative aimed at taking the wind out of Euroscepticism’s sails, and probably in dealing with David Cameron’s renegotiations. Of course, no one can object to it in principle – it is like being against motherhood and apple pie. But it comes at a price.

There will be competition for obtaining one of the 23 legislative spots each year (or whatever the final number is), and so the kind of cross-border initiatives which have benefited lawyers’ work – in dealing with cross-border succession or minimum criminal procedural safeguards, for instance – will struggle to find a place. As my list at the beginning showed, the EU is dealing with enormous issues and in general justice matters rank low among the priorities of any government. We will therefore find few solutions proposed in future to deal with lawyers’ bread-and-butter needs arising out of the single market.

You would also think that lawyers should play a key role in assessing the impact of new and past laws, because we are the ones in the frontline of implementation. But, for the principal board that will lead the work, the commission is looking for people with ‘proven academic expertise in impact assessment, ex-post evaluation and regulatory policy generally’. I am sure those skills are wonderful, but they appear to exclude lawyers who actually use the directives every day.

Excuse me for being cynical. I can allow that better regulation may be a clever political ploy at this point of the European debate. But, as a measure on its own, despite its title promising us the paradise of improvement, I cannot be persuaded that it will lead to a better Europe.