Turkey – a patchwork response from lawyers

How did the profession respond to the attempted coup internationally? And would a unified position have greater impact?

Many bars and international groups of lawyers have issued statements of condemnation about recent events in Turkey. They have not all said the same thing, though.

Yes, they have called on Turkey to respect international standards and the rule of law, but that is nearly their only common feature. It is instructive to look at how they differed – and a shame to have to read so many documents to obtain a full picture of lawyers’ responses.

I start with the American Bar Association (ABA). The ABA is the only one which is undertaking extensive and ongoing project work in Turkey through its Rule of Law Initiative. Indeed, a fortnight after the coup attempt they advertised a job for a media and communications consultant for one of their Turkish programmes, which focuses on raising Syrian refugees’ awareness of their rights and obligations in Turkey.

The ABA statement on the coup and its aftermath was very brief, but its opening statement is noteworthy: ‘The ABA expresses concern about the attempted coup in Turkey and supports Turkey’s right to defend its democratically elected government.’ This stands out from the other bar responses, in explicitly mentioning the coup attempt itself with concern, and supporting the right to defend democracy.

This approach appears to more or less reflect the attitude taken by the Istanbul Bar Association, which has a history of standing up for the rule of law in difficult circumstances. 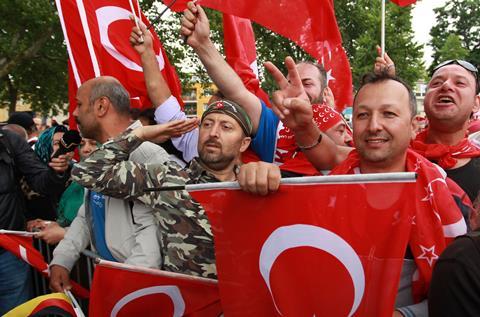 I am sure there were many reasons behind the ABA’s response, including that they have staff and continuing programmes in the country (and that they would like to go on working there). It is clear that the Turkish government is affronted by the foreign response to the coup, which seems to express more outrage at governmental attempts to deal with the coup than at the coup attempt itself.

The Council of Bars and Law Societies of Europe (CCBE), Union Internationale des Avocats (UIA), and Federation of European Bars (FBE) have issued a joint statement on the government’s post-coup activities.

All of these organisations have the Union of Turkish Bar Associations (UTBA) as a member (which clearly the ABA does not).

They call on the Council of Europe to be rigorous in monitoring Turkey’s actions, and on the EU to agree a common position on the Turkish government’s crackdown.

The International Bar Association (IBA) also has the UTBA as a member. The IBA has issued two statements, one from its Human Rights Institute (IBAHRI), and one, a week later, from its own leadership.

I fear that organisational elbow-shoving stands in the way

The IBAHRI statement is notable because it is the only one which expresses suspicions about the decision to remove more than 2,500 judges just a few hours after the coup attempt had failed: ‘The speed with which the supreme council of judges and prosecutors was able to identify such a large number of judges supposedly linked to the coup attempt is extremely concerning to the IBAHRI.’

Both IBA statements join with the ABA in requesting Turkey to comply with its own laws – they both specifically quote the Turkish constitution – as opposed to just the international standards mentioned by everyone else.

The leadership statement also draws attention to intelligence from Turkey that future judicial appointments will be carried out under the mandate of the justice ministry, that 25% of members of the highest administrative court will be presidential appointments, and that all existing members of that court and of the Supreme Court will be dismissed and new ones appointed.

Each of these statements makes at least one unique point, and each unique point is worth making. It would be better – more powerful, more effective – if in such significant circumstances there were a single response from lawyers worldwide, incorporating all points of view from the major lawyers’ bodies.

But I fear that organisational elbow-shoving stands in the way.