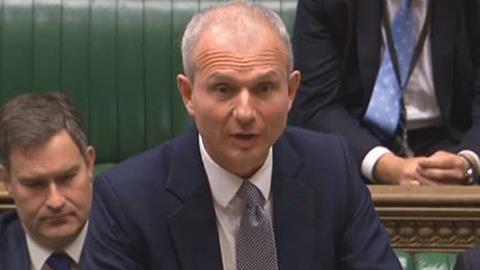 Up for the challenge

On Wednesday, less than four weeks after his appointment, the new lord chancellor will face his fiercest critics. Her Majesty’s judges, having been wined and dined by the City of London Corporation, will settle down to listen to the fourth non-lawyer to hold the post in as many years.

David Lidington is up for the challenge. He knows his political theory and sees the lord chancellor as a constitutional ‘hinge’, connecting the executive with the judiciary. From his visits as Europe minister, he also knows only too well that democratic elections are no guarantee of judicial independence.

When I interviewed the justice secretary for my Radio 4 programme Law in Action last week, I reminded him that his predecessor, Liz Truss, had been accused of failing to stand up for judges after a newspaper had called them ‘enemies of the people’.

‘I see it as my role to speak up very firmly on behalf of judicial independence if that is challenged in the future,’ he said. All judges expected their decisions to be criticised. ‘But they have a right to expect that criticism will be tempered by an awareness that judges are there to interpret the law on the basis of arguments and evidence put to them in court.’ He wanted his fellow MPs to understand that judges, unlike politicians, could not answer back.

Fifteen days into the job, Lidington demonstrated an impressive grasp of his brief. He had read the recent judicial attitude survey, spoken to senior judges and recognised that there was a problem with judicial morale. A pay review would report next year and reforms to be introduced in the Courts Bill would lead to better working conditions for judges and court staff as well as a better service for litigants.

‘What we’re looking at is using digital technology to provide for swifter justice, to signpost people sometimes towards dispute resolution in civil justice proceedings which might lead to a quick out-of-court settlement, and to avoid the need for people – whether they’re prisoners under escort or someone turning up to plead guilty to a summary offence – from the hassle of having to turn up in court sometimes.’

The bill would also benefit victims of domestic violence, he promised. They would no longer be cross-examined by their alleged attackers in the family courts. And the government would consider changes to the criminal law. ‘There may well be a case for consolidating and redefining some of the offences involving domestic violence so we can ensure people get the justice they deserve.’

But Lidington had little reassurance for hard-pressed legal aid practitioners. His department would continue with its review of the Legal Aid, Sentencing and Punishment of Offenders Act 2012 and that review would form the basis for any decisions he might take.

‘There was a need to reduce the overall legal aid bill in this country,’ he insisted. ‘The objective my predecessors strove to achieve was that people who really needed support should be able to get it. We had to take account of the overall cost to the taxpayer.’

A separate Civil Liability Bill would reduce the compensation payable to drivers and passengers who suffered whiplash injuries in road traffic accidents. But would the reform also reduce motor insurance premiums by £35 a year?

‘The insurers have said publicly that they would pass on that saving to their customers,’ he said. ‘The evidence suggests that there were a large number of unfounded whiplash claims.’

At his swearing-in, the new lord chancellor said his priorities included promoting legal services and ensuring that foreign businesses continued to use English law as their law of choice. But didn’t Brexit make it much harder for London to maintain its position in the legal world?

‘Legal services are worth something like £25bn in UK exports,’ he replied. Legal and professional services were vital to London, he said, as well as to major regional cities. He promised to ensure that David Davis, the Brexit secretary, was fully briefed on the need for mutual recognition of judgments.

‘When the Repeal Bill is published, I think there’ll be a measure of reassurance to all sectors of business, including legal services. The principle behind it is to transfer the current EU acquis on to a UK statutory basis, to try to avoid any sort of cliff-edge on the day after Brexit.’

But that might not be sufficient, he admitted. ‘We need to look at the growing opportunities for legal services business in other jurisdictions around in the world. The UK’s primacy is being challenged by the Americans, by the Singaporeans and by others. So we need to get out to third countries – not just to our European neighbours – and make the case for London and the UK legal services sector. That is what I and my ministers will be doing.’

Let us hope they succeed.