If a judge holds a video hearing, whose face should appear on screen first? The judge? Or the person appearing in court by video link?

You would expect it to be the remote user. Traditionally, the judge is never kept waiting – certainly not while sitting in court. So when a defendant facing criminal charges is appearing from a prison or police station, court staff will set up and test the video link before the judge arrives.

That happens routinely these days, at least for case management hearings in the Crown court. It saves the cost of bringing defendants to court and minimises the disruption to the prisoner’s daily regime.

But surely defendants will be disadvantaged if they cannot have a private word with their lawyer ahead of a hearing? They will; but that can hardly be an insuperable problem, especially if the lawyer is appearing by video link too – as already happens in the Court of Appeal.

Some free advice, though, to any advocate thinking of trying this out: do not use the camera on your laptop. The computer is bound to move as you type and you are hardly going to make the best impression if the court is looking up your nose. Buy a clamp for your mobile phone and a tripod that stands on the floor. Set up the phone at eye level, look straight into the camera and make sure there are no lights, windows or distractions behind your head.

It is not hard to foresee solicitors appearing by video before several different magistrates’ courts in the course of a morning. Career criminals are more likely to have the representative of their choice if their favoured solicitor does not have to travel to a distant court. And, as the lord chief justice pointed out in a speech earlier this year, almost no appellants appear in person in the Court of Appeal Criminal Division these days. ‘They do not want to,’ he explained. 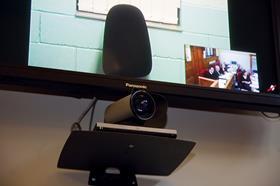 Lord Burnett of Maldon then turned his attention to the video hearings that were recently piloted in simple tax appeals by HM Courts & Tribunals Service. The  advantages should be obvious, the lord chief justice said. ‘If parties and witnesses are able to appear via their computers, it will be easier for them to fit their court appearances around their lives. Hitherto, we have required lives to be fitted around court appearances – however short – with the attendant travelling, wasted time, inconvenience and interruption of work or domestic activities.’

An independent evaluation of the tax tribunals pilot has now confirmed this: one appellant was looking after a new baby while another took part in the hearing from Greece. Both were delighted at not having to attend in person. But others thought it difficult to establish empathy with the judge through a screen.

Of the 11 contested cases deemed suitable for video hearings, all but one had technical difficulties. Most were resolved quickly but three cases could not proceed because of Wi-Fi failures. Two of these went ahead by telephone – which was not as easy for the parties to follow – and one was rescheduled as a conventional hearing. Technical staff were on hand to help but there were concerns about the level of support that might be available in the future. One judge said that video hearings should be used only if they were more convenient for the parties and not just because they were cheaper.

HMCTS used to describe these as ‘virtual’ hearings until somebody realised that ‘virtual justice’ did not sound very reassuring. So the term ‘fully virtual’ – which used to mean a hearing attended in person by none of the parties – has become ‘fully video’, which makes rather less sense. But the concept is here to stay. Kevin Sadler, director of development at HMCTS, said in July that his colleagues would like to ‘test the use of fully video hearings for bail and remand decisions’. But, he insisted, ‘it will always be for the judge to decide whether to use the option of a fully video hearing or not’.

Where does all this leave the concept of open justice? It is HMCTS policy that if changes are necessary they must lead to more openness rather than less. So the press and public will be able to visit their local court centre and watch any fully video hearing, even one whose participants may be many miles away. And most jury trials will continue to take place with all parties in the courtroom.

Back to my opening question. Experience in the tax tribunals has shown that participants may not know who else can see and hear them when they join a hearing. So it may be better for the judge to appear first and explain what is going on. In cyberspace, it is the little things that make all the difference.