The UK is not the same as Russia – but we should not be so superior.

The European Bar Presidents Conference is an annual event held in Vienna around the time of Carnival (and so its date moves with the religious calendar). It made its name back in the days of the Cold War, when it became the only place where lawyers from either side of the Iron Curtain could meet each other.

At first, I thought that its theme for this year – ‘Power rules law?’ – was a sign of desperation. I know that it is difficult to come up with a different topic each year which binds together lawyers from across the continent. But as I listened to the speeches, focused principally on recent events in Ukraine, I began to change my mind.

Ukraine is a good example of a country where power rules law. In the annexation of Crimea by Russia, the law changed overnight. The judges and lawyers who had been applying Ukrainian law on Monday had suddenly to apply Russian law on Tuesday. They had no training for it, no preparation for the change-over, no Russian qualifications. You can argue forever as to whether the annexation was in line with international law, but it makes no difference. Russian law now applies in Crimea, regardless of the legality of the switch.

Yes, yes, that is Ukraine, and concerns ‘a quarrel in a far away country between people of whom we know nothing’. But we should not be so superior. All legal orders – even our own, of which we are so rightly proud, and which we believe sprang fully formed out of early English mists – arise out of revolutions and rebellions, some kind of overturning of the previous order.

Magna Carta, whose 800th anniversary we are celebrating this year, came about because of a rebellion over the existing system by the barons. When the King soon after refused to comply with it there followed the First Barons’ War (1215-1217) in which a group of rebellious barons, supported by the French army under a future king of France, made war on King John. That begins to sound a bit more like what has happened in the Crimea. And our history is littered with violent incidents – the suffragettes being the most recent (if mildest) example – where currently accepted norms of equity and the rule of law were forced onto the existing order against its will. 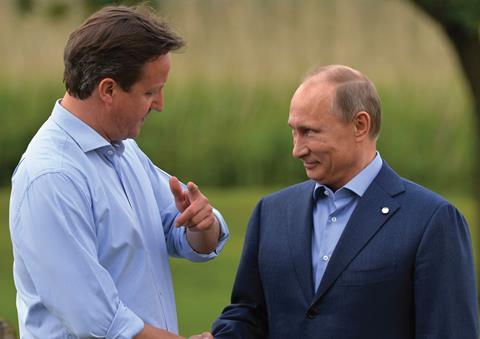 Yes, yes, but our changes were all in favour of an improved legal system, whereas in the Crimea a new order has been imposed by a more or less totalitarian government with brutal disregard for human rights. Of course, people always think that their own systems are best. We love our system, which we think the fairest and most democratic in the world.

But if you look back at just the last five years, you see the operation of an imperfect framework: MPs fiddling their expenses while passing laws telling other people how to behave; City of London institutions corrupting standards they were meant to uphold (LIBOR, foreign exchange rates, and so on); a newspaper running ‘a state within a state’ through phone hacking, corrupting officials and terrorising the authorities to follow certain policies; and even today we see how depriving the state of its money has different consequences depending on whether you are poor (imprisoned for being a benefits cheat) or rich (practically no convictions for squirrelling away money in Switzerland).

Our system, to put it briefly, favours the rich, the owners and the elite – and in the main we do not complain because that is the settlement with which we are familiar.

Of course, I am not saying that the UK is the same as Russia; nor that there is moral equivalence between the ghastly occupation of Crimea and the inspiring sacrifices of the suffragettes; nor that I would just as easily live in Russia as in the UK.

No, no, no. I share the common abhorrence of the current regime in Russia and its activities. But what I am saying is that a discussion of Ukraine makes us reflect on how our own legal order has come about, in order to answer the question ‘Power rules law?’ The answer turns out to be: ‘Of course power rules law, everywhere, even in the mildest and fairest of countries.’

There are periods of calm and developments through consent. But all countries have their upheavals, illegal in accordance with the previous order, which usher in a new dispensation. These changes can bring improvements and growth. However, the dispensation which is introduced seems always to advantage the newly favoured elite. That is how it turns out. And we, whose job it is to patrol the rule of law and work it throughout our lives, should not be under any rose-tinted misconceptions.