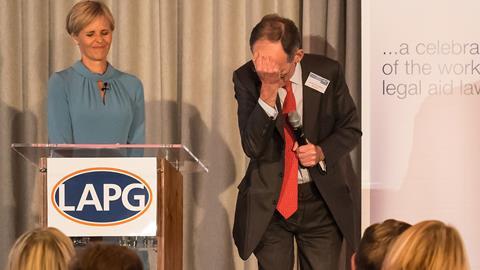 Judges are careful not to comment on government policy to ensure the judiciary is seen to be independent of the state. However, Sir Andrew McFarlane, who takes office as president of the family division next weekend, may have come up with a mind-boggling way to get round this problem when, perhaps, there are issues judges feel strongly about.

Collecting the 'outstanding achievement' award at the Legal Aid Lawyer of the Year Awards ceremony on Tuesday night, McFarlane said it was 'quite right' that judges cannot comment on policy matters. Thus 'The speech I cannot give is a problem', the former legal aid barrister said. 'So, I'm going to do a thought transference exercise,' he told an ecstatic audience. 'I'm going to think of the speech I would have given if I could have given it and you're going to think hard about what I'm thinking about.'

At the end of the 'transmission', he would raise his hand and lawyers had to cheer if they agreed with what he said.

After a visibly intense bout of concentration, McFarlane raised his hand. Judging by the loud cheers and applause that erupted, Obiter can only assume McFarlane called for the government to reverse the legal aid cuts.