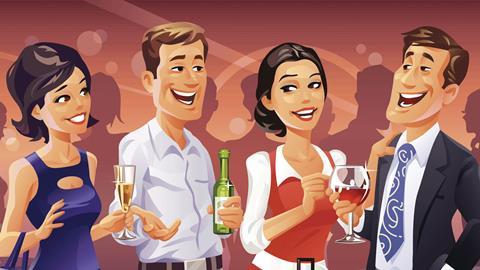 Five tips for saying what you do

You’ll never again have to worry at parties when someone asks the dreaded question, ‘What do you do then?’, thanks to Eduardo Reyes’ top small-talk gambits

Do you fear that a bored, listless look will descend over your interlocutor’s face when you say what you do? While, objectively, we know there are likely to be prosaic aspects to being an astronaut, novelist or ambassador, it would still be welcome for lawyers to feel at ease when laypersons are in the room. The Gazette asked socially seasoned practitioners for tips.

This is the radical option, but bear with us – it is a viable tactic for some.

Wedlake Bell partner Suzanne Gill recalls that her father, who was an airline pilot, used to tell people he ‘worked in aluminium tubing’. That brings to mind ex-Kent Council legal supremo Geoff Wild, who told the Gazette: ‘I try to leave telling people I am a lawyer till the end. I would much rather that they see me first as an innovator, explorer, change agent, problem solver or entrepreneur.’

But are change agents popular? It’s not clear. Perhaps a little dark humour is in order. Melinda Giles, partner at Giles Wilson, relates the tactic of Law Society wills and equity committee member Ian Bond, who says: ‘I help and encourage people to die tidy.’

Or maybe ‘obvious and straightforward’ should win the day if you think it’s better to have people look askance than have them nervously back away.

Gazette local government columnist Nicholas Dobson believes you need to own your identity.

‘I say: “I’m a lawyer,”’ he says. ‘Their eyes quickly glaze over. This then frees the conversation to move on to more exciting topics.’

Indeed. Although Gill appreciates her father’s humour, she hasn’t copied the tactic.

‘I don’t see why you need to be coy about the day job if you enjoy it,’ she reasons. ‘Our head of family law secured an instruction by chatting to a stranger during the 5k Walk for Life in Battersea Park one year – you never know who you’re going to meet.’

Perhaps you could try: ‘I am a lawyer and raconteur.’

‘Tales of the unexpected usually spice things up,’ Giles advises, ‘such as the ever-so-smugly married couple with 2.2 children who came to make their wills, and the husband chose that moment to divulge that he had a child with another woman – the age of which slotted in between the two family children.’

She adds: ‘Our view is that our area is the “sex and drugs and rock ’n’ roll” of law. We know where everyone’s skeletons are buried – and a lot more besides.’

‘Avoid the words “criminal lawyer”,’ Anthony Edwards of TV Edwards advises. ‘They’ll ask what offences you’ve committed.’ One question is inevitable: ‘How can you represent them when you think they are guilty?’ Edwards says the answer is, ‘I don’t form a view or have any feelings. That’s someone else’s job.’

‘I’m a family lawyer,’ Hall Brown’s Andrew Newbury says. The other person then describes their speeding ticket problem regardless, while Newbury ‘has a stiff drink and pretends to listen’.

Family lawyer Annmarie Carvalho has the added complication of explaining her role as a mediator and counsellor: ‘I tend to say that it’s about helping people sort out the practical stuff that needs to be dealt with when relationships break down.’

Mention of mediation gets a blank look. ‘Some ask whether that’s the same as counselling,’ she reveals. ‘I say it’s about getting people together in a room to try to agree things without going to court to have a judge tell them what to do.’

Glazer Delmar partner Caroline Sherry also goes into a bit of detail: ‘I say I am a conveyancing solicitor, which means I help people buy and sell property, but also act as an unpaid therapist, life coach, relationship counsellor, and provider of anger and stress management to my clients.’

State versus private: no one else’s business?

The legal profession has been discussing social mobility for a while and there are various ways to measure it. Among them are whether a lawyer’s parents went to university, if that person had free school meals – and, crucially, whether they went to a fee-paying school. New research from the Sutton Trust(see news) shows that just 54% of early-career solicitors were educated in UK state schools, compared to 92% of the general population.

It’s rare to find a lawyer who opposes social mobility. But it is notable that when politicians say they are in favour and then send their offspring to Winchester or Roedean, they get a rough ride in the press.  David Cameron and Michael Gove found state schools for their children, avoiding the media roasting laid on for Diane Abbott and Shami Chakrabarti.

At one level, if social mobility is about helping others ‘up’, is it at all helped by keeping your offspring ‘down’? That’s especially the case if your children – whisper it – don’t want to be lawyers. And anyway, so long as you are self-aware, and open to the real skills and intelligence of people regardless of background, there’s no need to ‘ape’ them. That’s patronising.

Going against that is the point that people buying advantage for their own children – while hand-wringing over unequal opportunities in the more gilded parts of the legal profession – are part of the problem.

A privately educated lawyer who feels torn over this might consider that they are assuming that state is ‘worse’. Yet 76% of undergraduates at King’s College, Cambridge, went to state schools. By the time the lawyers among them are applying for training contracts, they will be the ones who, in social terms, can speak more than one language.

Perhaps lawyers can be a little too coy about their own role in ‘helping’ their children, regardless of secondary education. They are often impeccably well-connected and able to offer that ‘leg up’ by leveraging professional networks. Human nature, you might say. Yet if you think it’s nobody’s business where a lawyer educates their child, ushering them into unpaid internships (for example) is surely more problematic.

There are many ways for privilege to propagate which render fine words about social mobility just so much empty rhetoric.