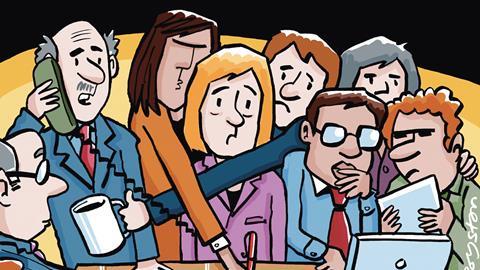 How to: make hot-desking work

What if you left for work not knowing where you would be sitting that day? Eduardo Reyes looks at the pros and cons of hot-desking.

Personal space is important in the office. In an age when lawyers have become accustomed to mobile technology that allows them to complete tasks everywhere – from a cow shed, to the kitchen table, to an airport’s international departure lounge – the space people carve out in the office is territory to be defended.

As managers attempting to rearrange an office have discovered, colleagues are wont to defend the configuration of their work area and the personal detritus that comes with it. Pictures of family or pets are pinned around – and highly intelligent people can turn moody when their favourite stapler is not returned to its allocated place. As on a school trip, people want to sit near their friends; or, like some walking St Paul’s Cathedral, insist they have a ‘protected view’.

But refuseniks among staff and partners are not just being precious in expressing scepticism. The Gazette spoke to many professionals with experience of working in a ‘hot-desk’ environment who were ambivalent or even hostile. As one put it: ‘You need a space to call your own, to keep your spare shoes and your secret stationery. Other people mess up desks, adjusting the chair to silly heights, stealing the hole-punch and leaving rancid coffee cups all over the place.’

Or, as another put it: ‘It is one of the curses of modern life. There is nothing worse than having to fight through the weather and traffic of your morning commute only to have to fight your work colleagues for a bit of desk to actually do any work on.’

This is the difficult terrain on which spatial innovators – if we may describe them thus – must operate. If open-plan was controversial to some, the idea of ‘hot-desking’ is in a different league. Done badly, yet another recovering hot-desk veteran confirms, ‘there’s lots of evidence that it reduces morale, productivity and team spirit. My experience of it confirms all those to be true’.

For managers undeterred by this feedback, there is comfort in the fact that the model does have its supporters.

It is argued that its disruptive nature is a positive thing – breaking up entrenched habits and encouraging flexibility between teams. One (now home-based) worker observes: ‘You get to network better with your peers as you are not always in the same place in the office. You get to spend time with more of your colleagues and team rather than getting to know the people you’re sitting with very well and others just in passing. You get to spend your breaks with different people too, as you get to know them. This makes it easier to ask them about work and collaborate.’

She adds: ‘Hot-desking improves networking within the organisation, which is compromised by flexible working in terms of time and place.’

Nevertheless, the principal consideration is usually financial. Prime office space is expensive and its cost per-square-foot is often second only to the staff pay bill as the managing partner’s key expense. Flexible and agile working pay very limited dividends if you cannot cut down on space too.

Still, that cost dividend will not be paid unless hot-desking is adopted for broader reasons.

‘We do hot-desk, and I wouldn’t have it any other way,’ says Neil Quantick, managing director of three-branch law firm Quanticks. For several years now, the firm has been both paperless and open-plan. ‘One has to assume that hot-desking sits with open-plan office space,’ he adds.

Quantick does not mention cost first. Instead, he urges his peers in the legal sector to take a step back and consider the benefit of behaving more like some of his clients. ‘Look at most forward-thinking businesses these days and you will just as likely see the CEO in the main open-plan office as you will any other member of the team,’ he says. ‘It’s all about working where you need to, when you need to, and as one team – free of rank.’

Viewed in this light, new working arrangements are about cultural and not just practical change. ‘I fear that lots of lawyers still rather like rank and status,’ Quantick reflects. ‘Sitting next to their much less important colleague is totally out of the question. They need an office to match their degree of importance.’

As Quantick hints, it is clear that a successful hot-desk system will never be about just taking desks away. Chris Moriarty is development director at Leesman, a workplace thinktank that measures workplace effectiveness. He says: ‘You are better off keeping people in their own cubicles if the rest of the office is going to be badly designed.’

But, he adds, a change that creates ‘a huge variety of settings’ – of which a hot-desk policy is part – can mean that both ‘satisfaction’ and productivity go ‘through the roof’.

Moriarty recommends starting any proposed change by building an ‘activity profile’ for the office. A typical office, where an average of 11 activities might be performed by any one person, would show that not all are best completed at that person’s desk.

What this analysis would most probably suggest is that professionals, in this case lawyers and support staff, need areas for collaboration, confidential discussions, quiet time and so on. But one element that affects the success of the change is the office set-up it builds on. Frequently, Moriarty notes, an open-plan arrangement was introduced ‘just to squeeze more people in’.

Technology which supports seamless and agile working has an indifferent reputation when called upon to facilitate hot-desking. ‘I’ve never called IT for help as much as I did in the three-month period when I hot-desked,’ says one Gazette contact. ‘I’m fine with it in theory – like an idiot I volunteered for it – but it was such a waste of time in practice.’

Martin Arnold, managing partner at City firm Wedlake Bell, is another lawyer who does claim to have made hot-desking work. The firm made headlines last year as one of two that had introduced such a system – a system that he actually works within. ‘Having worked flexibly, including hot-desking, for almost a year I can say with the benefit of genuine experience that the principal barrier to the adoption of flexible working practices is fear of the unknown. That is an irrational response that is quickly overwhelmed by the actual experience,’ Arnold tells the Gazette. ‘The technology is there and it is simply a matter of adjusting the mindset and using the tools available to make the most of all available resources.’

So what parameters should be considered? DAC Beachcroft, whose hot-desking pilot in Leeds was made public at the same time as Wedlake Bell’s, decided that ‘static workers’ (such as secretaries) should be allocated specific desks.

Quantick suggests that creating ‘zones’ might be necessary, though he would not want this to be too restrictive: ‘I happened to be at a large airline HQ a couple of weeks ago… while they have “zones” for some disciplines that need to be close to each other, the office is open-plan and it’s hot-desking all the way.’

In short then, if you are going to make hot-desking work, take care to design your revamped office well. Tales of committed but frustrated professionals searching in vain for a desk are commonplace, so there needs to be some slack in the system. DAC Beachcroft’s experience suggests one possible formula – for its pilot, the firm calculated that every desk was used 70% of the time, leading the firm to decide that there should be eight desks for every 10 people based at the Leeds office.

What, though, of people’s ‘stuff’ – the pictures of family and pets, the gym kit bag that lives under the desk, birthday cards, snacks, highlighter pens, unfinished books, bills, old copies of Grazia and unread Economist magazines? Are not these things ‘who we are’?

And what about other people’s coffee and sticky-bun stains? ‘The open-plan hot-desking environment brings with it a lack of personal space,’ says one sceptic.

There is little point in pretending that staff, fee-earners and partners do not have to compromise here. As an experienced hot-desker relates: ‘I have a mug which is mine and stays in my briefcase. I have a pic of my kids on my iPad. If I’m somewhere a few days, I might even invest in flowers if the office allows. And I have a slightly larger briefcase for my treasured stationery.’

And while it cuts into the ‘space dividend’ a firm’s leadership may have hoped to achieve, lockers for work in progress and personal items are often deemed necessary. In real offices, people do not drift around like bag-less, futuristic extras from an episode of Star Trek.

A necessary change in culture needs to extend to making sure colleagues are self-aware about habits and practices that leave a ‘mark’ on what are shared resources. Hot-desking will not suit everyone, and it is easy to find examples that do not deliver on the promise and workplaces where it has hit morale. Where it does work, it has been the result of close planning in an atmosphere where attention has been paid to space, technical support, project management and the cultural challenge of working in a new and different way.

Without attention to such things, lawyers are known to keep a straight face while delivering such lines as: ‘Hey! That’s my hot-desk!’