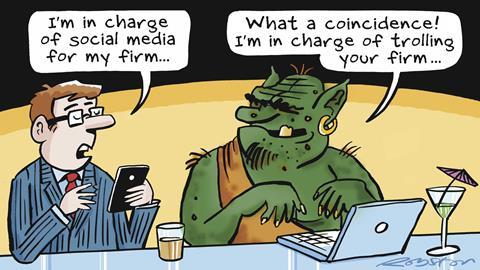 If you set out to do some due diligence on the value social media could bring to your organisation, the experience might be akin to nailing jelly to a wall. Certainly, dramatic figures abound – in June last year, ‘videos’ received views of 12.3bn through Facebook and 11.3bn on YouTube; by the start of 2015, picture-based Instagram had 300m users to Twitter’s 284m; and the top-17 instant messaging apps – including Snapchat, Tumblr, Pinterest, Facebook Messenger and Twitter – all grew by more than 20% last year.

‘Social media’, then, are clearly no fad. But in a professional services environment, their relationship to value strikes many as tenuous.

Here are some more stats. On Twitter, the focus of many law firms’ social media ‘strategy’, Linklaters (Twitter handle: @LinklatersLLP) has a creditable-looking 8,232 followers. But on this count the magic circle firm, which had revenues of £1.23bn last year and whose highest-paid partner took home £2.4m, trails in the wake of University College London law professor Richard Moorhead (@Richard Moorhead) who has 11,200. Broadcaster Fearne Cotton, for the purposes of contrast, has 6.36 million.

Looked at this way, why would a law firm bother – unless Twitter was a client?

It is, of course, all about communication and the medium is now an inescapable part of the communications landscape.

There is even a widely accepted ‘bottom-line’ argument too, PR agency Infinite Spada director Emma Wheeler (@spadapr) notes: ‘It is worth remembering that companies using Twitter get twice as many leads as those that do not.’ And it is largely Twitter that is occupying legal minds – as its use is seen to carry greater risks and better rewards than Facebook and LinkedIn (see box below).

In the legal sector rules governing the use of social media, and perception of their role in furthering an individual or corporate ‘strategy’ focus increasingly on Twitter. Firms report greater success in building a useful ‘identity’ on Twitter. But as a very public platform where other users can engage, praise, or deride, it is seen as carrying the greatest risks.

Other social media remain important, nevertheless. LinkedIn is popular with legal professionals (if a little staid) and is a suitable place to share longer articles and ‘thought leadership’ features. Its discussion groups (in the law at least) remain largely courteous, with everyone’s identity visible, and a group’s administrator is able to exclude a troublemaker. Contacts are made, and people’s expertise is checked by anyone with an interest in doing so.

Facebook may be perceived as a website where professionals interact with friends and family – to share pictures, links and thoughts. It is a fairly ‘safe’ space; but it is not leakproof, as ‘friends of friends’ can often see a post, comment or picture, and place it into the public domain. Law firms commonly use a Facebook page to reach a particular community – law students, say – or to celebrate an aspect of their work such as charity or community activity. In this context, it lends itself to pictures, videos and updates that might include praise or thanks for someone.

Video-sharing website YouTube is widely used for broadcasting short talks to camera – ranging from a lawyer talking on a recent legal development or an aspect of the law (for example, divorce) that the target audience will find helpful. Each user has a ‘channel’. As to length, Abraham Lincoln’s address at Gettysburg was under three minutes long – not a bad rule to follow.

‘Instant message’ services like Snapchat (messages are destroyed after a few seconds) have little traction with lawyers – not least because messages that leave no permanent record are deemed to carry risks.

As Moorhead notes: ‘For professionals Twitter is mainly a way of signalling some interest and/or expertise in a particular area and hoping to attract the attention of people who share those interests. It’s significantly more pithy and argumentative than the kinds of briefing law firms typically engage in.’

‘You need to be on there because chances are, your competitors will be,’ notes Melissa Davis (@mdcomms), managing director of legal sector PR agency MD Communications. ‘It’s a good opportunity to communicate with a large number of potential clients quickly and economically, [while] promoting your brand.’

According to Daniela Conte (@danielaconte), former head of PR at a top-20 law firm, the strength of the medium is that ‘social media allow an organisation to have an informal dialogue, in real time, with its clients. To ignore Twitter and Facebook is to waste an opportunity to communicate with the many people who use it on a daily basis’. She adds: ‘Most organisations now accept that they need some kind of presence, but are less clear about how best to do this.’

How indeed. The question is simpler at the self-employed bar, say, where a QC is ultimately accountable only to themselves. On any scale larger than one, things said on social media create an often-permanent record that reflects on the ‘brand’, not just the person who posted it.

Hence the nervousness with which risk-adverse professionals approach social media – they have read stories of jurors given a custodial sentence for ‘friending’ a defendant on Facebook, seen unguarded comments damage careers, and looked on in horror at the abuse that some individuals and organisations are subject to in the context of the two-way ‘dialogue’ inherent in social media. This is, after all, a bridge under which lurk many ‘trolls’.

Combine such fears with an acknowledgment that social media are here to stay, and the result is often a fairly stilted use of social media by law firms – Tweets that are really just short press releases; Facebook pages that acquire ‘likes’ from law students and staff, but which appear practically dormant; an Instagram account that has a picture of the managing partner and little else; and a few out-of-date videos on YouTube.

As a starting point, any rules set for individuals or for the use of the main account need to reflect the personal and fluid character of social media. As Moorhead says: ‘Happily the university doesn’t keep us on a corporate leash. I think you need a bit of freedom with something like Twitter if a feed is not to be sterile.’

Decide who you are trying to reach, Conte advises: ‘Don’t fall into the trap of worrying about how many “followers” or “likes” your social media accounts have. It is more important to have the right audience, not the biggest.’

Interviewed for the Gazette last year, Oliver Wilson, head of disputes at rural Derbyshire firm Nigel Davis Solicitors (with 10,500 followers, in the same Twitter ‘league’ as a magic circle firm), gave an instructive example: ‘We tweet the weird, wacky and wonderful as well as industry-specific information,’ he explained. ‘We are members of the Country Land and Business Association and the Countryside Alliance. We are pro-hunting and field sports, pro-badger cull and pro-meat. We have clients who think the same way we do, so we realised we could share our thoughts on the world without fear of offending anyone.’

‘It’s important to have a consistent social media “voice” – one that is usually very different to how you would normally communicate with people outside the business,’ Davis says. ‘More than one person can manage the channels, but it’s really important to have a solid policy in place for tone of voice and to firmly establish what you want to get out of it – for example, drive new business, customer engagement or branding.’

‘Developing an authentic, interesting voice is critical,’ Wheeler advises. ‘This can be done by tweeting regularly about an issue of interest to you and one on which you can comment credibly. Once you have decided what you want to focus upon, then keeping abreast of the media and regulatory agendas will provide you with a regular source of “hooks”.’

That personality should not be radically different from the person or organisation’s personality – insofar as social media carry risk, it is that the ‘virtual’ world is firmly wedded to the ‘real’ world. Conte cautions firms against ‘jumping into [use of social media] without using the caution they would show for dealing with other types of media’.

So rules apply. ‘Mix the personal with the professional, but gently,’ Moorhead suggests, adding: ‘if something makes you cross – wait before responding or ignore it completely.’ Davis reinforces the point: ‘We advise clients to be informal, but remain professional at all times and never, ever get angry, even when provoked.’

A firm needs to have a policy, Wheeler notes: ‘Always refer to your firm’s social media policy and ensure you have had training before you begin. This is important as there may be restrictions to observe for strategic, brand or reputational reasons.’

It is also entirely possible for a solicitor to breach the SRA Code of Conduct in this arena – they are still a regulated professional when online.

But a good policy should increase confidence in communications, not inhibit it, Conte stresses. ‘Stories are best when they’re shared by people who are telling them first-hand, and this applies to social media as well. The most interesting Tweets or posts are by people who are working in a particular area. A good marketing and communications team should be on hand, however, to provide support to those who are inexperienced and to monitor its proper use.’

Proper use of social media demands a time commitment. ‘Make a plan and build it into your daily routine,’ Davis suggests. ‘For example, 10 minutes first thing every morning to catch up on LinkedIn contacts; uploading a blog every other Wednesday; or 20 minutes over lunchtime to engage on Twitter.’ Some of that will be unscheduled, she adds: ‘If actively engaged on Twitter, be prepared for real-time responses, particularly if the issue being discussed is controversial.’

But that extra time commitment reflects what Moorhead notes is the potential value that social media add. ‘I’m not sure it has replaced anything in particular,’ he concludes. ‘That’s the beauty of it, if it has a beauty: a mass random conversation with whoever might be listening. It’s led to a few friendships and good professional relationships.’