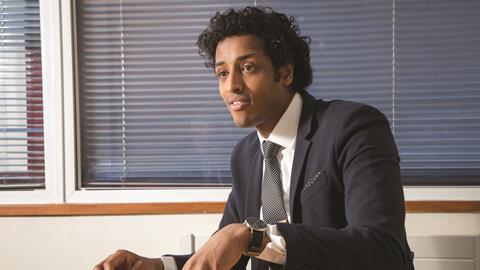 Solicitor Ahmed Aydeed’s anger is palpable. ‘It was a huge shock,’ he says, describing his first sight of the notorious Calais ‘Jungle’ refugee camps. ‘Within a few minutes’ walk of neat suburban homes,’ says Aydeed, ‘there was this lawless place. Sexual assaults, theft and violence were not investigated by French police. Children were running around in the mud between huts made of cardboard. Sanitation was, at best, basic.

‘The shock of seeing such injustice on our own doorstep, just 20-something miles from the UK, was devastating. No governance or the prospect of a decent quality of life. Unaccompanied child refugees at the mercy of traffickers. Women and girls who had been raped. People who had lost everything, including family members. It was like finding yourself in another world. It was the first time in my life that I can remember feeling depressed.’

Aydeed, winner of the 2017 Law Society Excellence Award, Junior Lawyer, has already accrued an impressive track record of defending the rights of immigrants and asylum seekers. A director of public law at national firm Duncan Lewis, he describes himself as having been at the ‘forefront in the battle against the unlawful detention of migrants in the UK, the unlawful processing of asylum claims through the Detained Fast Track system and, in particular, the criminalisation of trafficking victims, torture victims and unaccompanied child refugees.’

The judges said: ‘This junior lawyer… puts everything into representing asylum seekers and detainees to ensure that justice is served. (We) were amazed at his inspirational dedication and the impact his work has had on bringing the Home Office to account.’

He does not wish to give his own early life prominence when talking about his work, but Aydeed is himself a former child refugee. His parents – his mother worked in a bank and his father in real estate – fled the civil war in what is now Somaliland in 1990 when he was three. Somaliland is a self-declared autonomous state which, after years of conflict, broke away from Somalia in the early 1990s. The family settled first in Holland and then, in 2001, in Milton Keynes.

‘My work with immigrants and refugees isn’t inspired by my own narrative as a child refugee,’ he stresses. ‘As a law student, I became interested in human rights and the free movement of people. My prime motivation, now that I am a lawyer, is to help people who have lost their homes, livelihood, friends and relatives. I am proud to represent them and play a small part in their asylum application, to make a difference to their lives. Often this means holding the UK government to account when it bends or flouts the rules.’

So how does our government ‘flout the rules’? ‘Its U-turn on the Dubs amendment was utterly shameful,’ he replies. The Dubs amendment (or section 67) of the Immigration Act 2016 was proposed by Lord Dubs, who fled Czechoslovakia to escape Nazis as a child. After settling in the UK as a six-year-old, he went on to become a Labour politician and life peer. His amendment said that the UK government should host and support 3,000 unaccompanied child refugees from the estimated 95,000 currently in Europe. This was because the children, without parents or supervising adults, were vulnerable to trafficking and faced a very real threat of death.

The amendment received cross-party support, as well as endorsement from prime minister Theresa May. However, in February of this year, the government announced – after admitting just 350 children into the UK – that it would be accepting no more. Aydeed was interviewed on BBC television and LBC radio, where he explained the legal case for allowing unaccompanied child refugees to settle here – quite simply, the Dubs amendment has been passed into law by our national parliament and nobody has the authority simply to ignore it. The government, however, has refused to shift its position.

This stance has some popular appeal, judging by the online abuse heaped upon Aydeed following the broadcasts: ‘My mum was worried about some of the comments,’ he says, ‘but the demonisation of immigrants and refugees is widespread, no matter how many times people are told that they contribute much more to the economy than they cost the public purse.’

How else is our government flouting the rules around immigration? Aydeed replies: ‘It is detaining rough sleepers who are EU citizens and deporting them. It has got hold of information from homelessness charities to help it identify the nationality of rough sleepers, which isn’t at all how the charities’ data was designed to be used. It then deports the people it has detained on the grounds that they are abusing their treaty rights.’

Since November 2015, the Home Office has begun considering rough sleeping an ‘abuse’ (or, more recently, a ‘misuse’) of the EU Treaty right to freedom of movement. This change of policy has effectively criminalised EU nationals who are sleeping rough, making them liable to be arrested by the police, served with removal papers and imprisoned in detention centres prior to deportation. Aydeed says that some of the firm’s clients affected by this arbitrary change to how treaty rights are interpreted have been in the country for years, paid taxes and come to regard themselves as permanent residents.

They have become homeless – temporarily, they hope – because they are low-paid and work on zero-hours contracts. The smallest downturn in the economy can make it impossible to pay their rent and they have no alternative but to sleep on the streets. ‘They are desperate, and yet no accommodation or other help is offered,’ says Aydeed. ‘They are treated as criminals and deported.’

Why do the Home Office and police act in this brutal and uncompromising way? ‘Because they have targets to meet,’ answers Aydeed. ‘Basic humanity comes a poor second to notching up another “success”.’

Yet there is more to Aydeed’s work than immigration and asylum, ‘because, after all, I specialise in public law across the board’. With funding from the Legal Aid Agency, his firm is investigating the lawfulness of the Criminal Injuries Compensation Scheme, which provides compensation to victims of crime or accidents where the perpetrator of the crime or the person who caused the accident is either unknown or does not have the funds to make amends.

The case that sparked the firm’s interest concerned a 13-year-old girl with mental health issues who had sexual intercourse with an adult. On the face of it, this was clear-cut, says Aydeed. The law says that, even if the girl agreed to sex (which she admitted), she is below the age of 16 and therefore unable to give her consent. Her mental ill health also disqualifies her.

There is surely no argument: the adult has raped her and she merits compensation. Except compensation was refused on the grounds that, although under 16 and mentally ill, she consented. How can this be?

Aydeed responds: ‘She is a victim who has been treated as a criminal. Two policemen cross-examined her and that was when she told them she had consented to having sex. She was alone, with no responsible adult or solicitor to support or advise her. But then, why should she, a victim, need legal help? Shouldn’t the criminal justice system be geared to helping victims, not to depriving them of compensation? And shouldn’t extra care have been taken because of her mental state? She is a victim twice over: a victim of rape and a victim of austerity putting cost-cutting before justice.’ 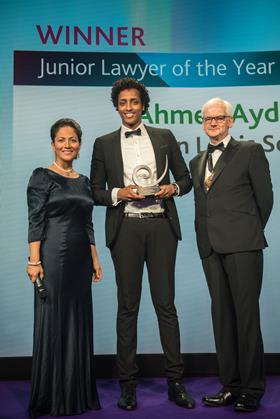 Hers is one of 700 cases where compensation was refused because a minor gave consent, adds Aydeed. The investigation continues.

Another project in Aydeed’s sights is identifying and assisting victims of people trafficking. A 16-year-old Vietnamese national, known as P, was charged and convicted over the large-scale cultivation of marijuana. His is the lead case in a generic challenge to the systemic deficiencies in the Home Office’s approach to assessing and treating victims of trafficking.

The police raided a property, where they found a very sophisticated criminal operation. They also found P, alone at the property and, despite his youth and inability to speak English, charged him as the ringleader of the operation.

In time, it transpired that P had been sexually assaulted, trafficked to the UK, forced into cannabis cultivation and held at the property against his will. A Home Office caseworker finally picked up on the indicators that P was potentially a victim of people trafficking, but too late to stop the Crown Prosecution Service (CPS) charging him and a court finding him guilty. The Home Office, nonetheless, still tried to remove him to Vietnam.

Aydeed takes up the story: ‘We were instructed and stopped P’s removal. We asked the CPS why they prosecuted P, to which they replied that they didn’t know he was a potential trafficking victim. Had they known, they said, they wouldn’t have proceeded. All P can do now is appeal against the conviction, which we’ve helped him do.

‘This is just one client whom the system has failed. We have a lot of similar cases, which is why we’ve brought the generic challenge.’

Aydeed is keen to acknowledge colleagues who have helped him progress so rapidly, paying tribute to solicitor Lewis Kett, who specialises in judicial review challenges, particularly in immigration and asylum. And then there is Stephanie Harrison QC of Garden Court Chambers, who shares Aydeed’s determination to hold the government to account.

But Toufique Hossain has perhaps had the most influence on Aydeed’s career. It was Hossain who two years ago began building up Duncan Lewis’s six-strong team of young people with a passion for human rights to today’s headcount of more than 40: ‘He tells us to be fearless, think critically and investigate novel points of law, fighting injustice wherever we find it.’

Aydeed is clearly a quick learner.

Known for: Winning the 2017 Law Society Excellence Award, Junior Lawyer, for his dedication to ensuring that immigrants and asylum seekers receive justice