How the Kaiser escaped the hangman’s noose

The Trial of the Kaiser

Dover Castle on chilly misty morning 100 years ago. Four burly military policemen escort a diminutive white-haired man with a withered left arm into a disused storeroom, already occupied by a line of top-hatted and uniformed dignitaries behind a rope barrier. Recognising one of the spectators, the prisoner calls in accented English: ‘Mr Churchill, you are making a terrible mistake - I demand to send a telegram to the King.’

Winston Churchill MP, characteristically bending his job description to be present at the making of history, declines to reply. 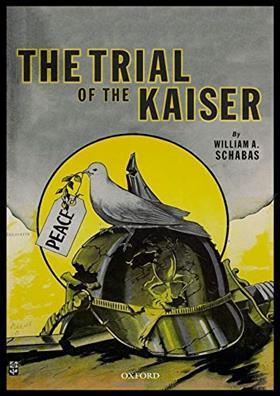 With a crash of stamping boots, the procession comes to a halt at the foot of an ominous flight of steps. The Provost Marshall of the British Army steps forward to read from a typed paper: ‘Wilhelm Viktor Albert Hohenzollern, you have been convicted by the International Criminal Court of the supreme offence against international morality and the sanctity of treaties. Have you anything to say before sentence of death is executed?’

Of course it never happened. Indeed in The Trial of the Kaiser, William Schabas, a renowned authority on war crimes trials, systematically explains why the prosecution of Wilhelm II, much less his execution, for the crime of the first world war was always a precarious proposition. This was despite the initial enthusiasm of the allied governments - Dover Castle was David Lloyd George’s suggested venue – expressed in Article 227 of the Treaty of Versailles arraigning the Kaiser for the ‘supreme offence’. According to the treaty, he was to be tried by a special tribunal of one judge each from Britain, France, Italy, Japan and the United States.

But, in a vivid contrast with the Nuremberg trials 25 years on, preparations to put Article 227 into effect were lackadaisical, Schabas says. Either the allied powers did not believe that proceedings would take place, or they envisaged any trial as ‘little more than theatrical… a shambolic production before compliant judges’.

An immediate difficulty was that the ex-Kaiser was installed in the neutral Netherlands, which refused to give him up. Then any hope of a five-power international tribunal was scuppered by the US’s refusal to ratify the Treaty of Versailles. Japan, humiliated at Versailles, had other priorities. And Europe's monarchs, not least King George V (though Schabas finds no smoking gun) became uncomfortable with the idea of putting one of their own on trial.

Schabas concludes that, even if a trial had gone ahead, it would have run into insuperable legal obstacles. Aggressive war was not an offence at the time and it would have been hard to hold the Kaiser responsible for escalations such as the bombing of civilians or the use of poison gas. The atrocities that exercised British public opinion, the executions of nurse Cavell and merchant marine Captain Fryatt, would have been particularly difficult to pin on the Kaiser.

Far from suffering the hangman's noose, or even Napoleonic confinement on Saint Helena, Wilhelm Hohenzollern lived out his life in a Dutch country house, dying in 1941 with a German sentry at his gate.

But the effort to try the Kaiser was not in vain, for the seed of an international criminal jurisdiction had been sown. Schabas closes his authoritative and impeccably referenced account with Georges Clemenceau’s optimistic words: ‘It was the beginning of something great.’