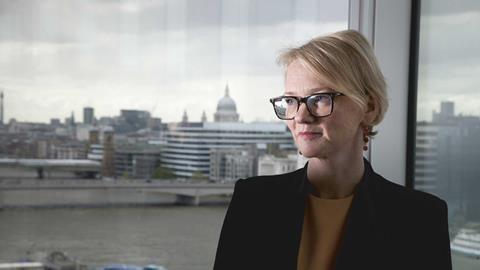 Big Four professional services giant Ernst & Young has a code referred to internally as ‘The Ten Commandments’. They are all core to the firm’s business, but three in particular weigh on UK general counsel Lisa Cameron’s mind: one, nine and 10 – respectively ‘take on the right clients’, ‘always consult’ and ‘always live our values’.

Joining E&Y in 1998 from international insurer Chubb, Cameron has been a key member of the small in-house legal team long enough to see profound changes in the business’s operating environment – in both commercial and regulatory terms. ‘I forget when our strapline was changed to "from thought to finish",’ she begins, ‘but lots of things had happened post-Andersen’s collapse, and it was a seminal moment. There’s been a change in focus in the professional and regulatory environment.’

It is now over a decade since the Big Five were reduced to a quartet by the demise of the Andersen colossus in the wake of the Enron scandal. What has become increasingly important since then, Cameron observes, is not just that E&Y is a regulated business, but also that as a profession accountants ‘have a public interest role – that means we have to be very careful’. Acting in the ‘public interest’ has put some of her own responsibilities centre stage, including her role as managing partner for quality and risk management, and a place on the global claims committee.

Regulators are often breathing the same air as the 6,000 professionals who call E&Y’s One More London address home. ‘The UK regulator is here six months of the year,’ Cameron notes. But the reputation that is at risk is not only determined by the regulator’s approval, important though that is. Cameron leads on quality and risk management, a ‘central factor’ for the business, taking in the legal team, audit, risk and regulation, and security – the latter including the security of the building itself. That adds up, she says, to the conclusion that ‘I have the best legal role in London’.

Cameron is a litigator by background, and that’s a CV point she shares with all members of a lean legal team. ‘We only hire litigators,’ she says. ‘The reason is that litigators are great at risk management. They know what can go wrong.’ In her time, E&Y has faced down a massive claim arising from the near collapse of Equitable Life – the chairman of which, ex-Macfarlanes senior partner Vanni Treves, was tireless in pursuing recovery through the courts for Equitable Life policyholders. The claim against E&Y, for £700m, was dropped in 2005, though in 2010 the auditor was eventually fined £500,000 by the accountancy profession’s disciplinary body over issues arising from the affair. And as Cameron notes, for individuals sued by Equitable, the process concluded even more recently.

So is that what ‘going wrong’ looks like? No professional services firm will be without claims, she adds: ‘Some are claims we get rid of quickly. Some concern jobs where maybe we got something wrong. "Wrong" can be extensive, and depends on which part of the business it occurs in. Consulting has very few issues compared to tax.’ Actual litigation, though, comprises less than half the team’s work. ‘Wrong’ in Cameron’s book includes taking ‘the wrong type of client’ or the wrong type of work. It can be unpaid fees.

To manage those risks, ‘client acceptance’ is central – the first ‘commandment’. ‘There’s a danger client acceptance becomes a process, rather than a crucial commercial judgement,’ she cautions. ‘We have to ask: do we want to be associated with the client? Will we be fairly paid? What are their corporate governance arrangements? Who are they associating with?’ Such hard questions sit behind the internal soundbite, ‘no client is so important as to put E&Y’s reputation at stake’.

To stress the importance of that message in an economic environment which she admits is ‘tough’, Cameron has focused on ‘getting closer to partners and more senior people’. ‘Partners love terrible war stories,’ she says – stories relating to ‘taking on a wrong client, or doing a piece of work we shouldn’t have done. That’s important in this environment, which is tough and competitive. When you take on a client, it may be that the turnover is great this year. What about the next year? Has there been publicity for the client? Or financial irregularity? We may need to approach the same client in a different way in different years.’

Recently, a fresh set of challenges has been added to the list of what could be ‘wrong’. The Commons Public Accounts Committee, political leaders, unions and the media have all directed a spotlight on corporate and personal tax avoidance. Furthermore, the audit giants are under scrutiny from the Competition Commission, which is concerned that the market offers too little choice. The Big Four audit 90% of the UK’s big quoted companies. In February the commission highlighted concern that the relationship between auditors and company management becomes too comfortable, with a ‘tendency for auditors to focus on satisfying management rather than shareholders’ needs’.

‘It’s a new world – we need to respond to that,’ Cameron says. In that world ‘we have to be more transparent’, she adds, and Cameron expects new regulations will reflect this reality. She adds that some clients are already ahead of the commission – more routinely tendering audit work. Cameron is also dealing with new demands arising from whistleblowing, dating from 2005 and the need to comply with the US Sarbanes-Oxley Act. She receives direct ‘whistleblowing’ reports for E&Y. This has, she indicates, become an increasingly reliable source of information for issues that need to be addressed.

OTHER ROLES board member, Ernst & Young UK; member of the global claims committee; partner-sponsor of the disability working group

‘We used to get allegations that weren’t suitable,’ she recalls. ‘"So-and-so works for Ernst & Young and hasn’t paid their gas bill", say.’ While some issues are ‘still small, ‘the quality of reports has increased – I think that’s a positive’. Together with the ‘ethics hotline’, she says, use of such reports plays to the openness that needs to be at the heart of the ninth commandment – ‘always consult’. Number 10, ‘living our values’, includes another commitment Cameron has taken responsibility for, as partner sponsor of the firm’s disability working group. She notes progress here, with new ‘sub-networks’ set up for staff covering both stammering and dyslexia.

But it is on work done to promote mental health that she is most clearly passionate. Cameron has worked hard to make mental health an issue taken seriously in E&Y. ‘One in four people suffer with mental health problems, and this is very important for partners and staff,’ she says. Speakers she has brought in to give the issue a higher profile include Alastair Campbell, who has been candid about his own history of depression, and Dr Steve Peters, psychology coach to GB Cycling, who came to an E&Y talk about mental ‘wellness’. ‘We want people to consider: how do you achieve physical and mental wellness? How can we help our people avoid the loss of mental wellness?’ On this issue as with others, she argues: ‘It comes back to tone from the top – with disability, as with other things, what do we want to be known for?’

In the next 12 months the tasks that await include reviewing master services agreements, and global services agreements, and the framework agreements clients increasingly demand for cross-border and international work. As a member of the global claims committee, Cameron will be continuing to look at claims worldwide; a task central to operating in jurisdictions where the firm needs to grow its business. ‘We’re interested in whether we’re seeing trends in the litigation we face,’ she notes. ‘We have claims in some parts of the world where professional negligence claims are a new thing.’

Taken together, this makes a fullish in-tray for a small legal team. The accountant headcount for Cameron’s region is 12,000, advised by the equivalent of nine-and-a-half full-time lawyers. ‘We’re hiring one more lawyer – so they can do the second best legal job in the UK,’ she quips.

External counsel who support the team are also few in number, at just seven. To make the resource work, Cameron is keen on secondments, even at partner level. ‘The environment in-house is so different to private practice,’ she says. ‘In part it is the pace – what we juggle all the time. Every day there are important judgements we have to take to protect our people and our businesses from risk. That’s our world. You are always juggling. So they have to understand our business – and be in a long-term relationship.’

To work under such pressure, for any client, she concludes, ‘knowledge and loyalty are key. They cut out so much time’.