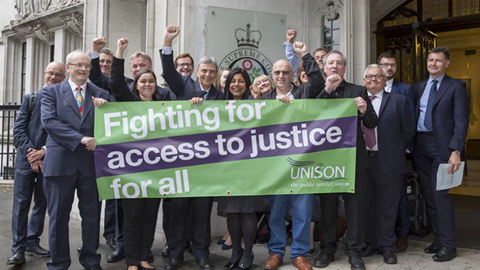 The Employment Tribunals and the Employment Appeal Tribunal Fees Order 2013, SI 2013/1893, which allowed fees to be imposed in respect of proceedings in employment tribunals and the Employment Appeal Tribunal was unlawful, both at common law and under European Union law, and indirectly discriminatory, because it effectively prevented access to justice. So held the Supreme Court in allowing the appellant trade union’s appeal in respect of its unsuccessful judicial review challenge concerning the Order.

Until the coming into force of the Employment Tribunals and the Employment Appeal Tribunal Fees Order 2013, SI 2013/1893 (the Fees Order), a claimant could bring proceedings in an Employment Tribunal (ET), and appeal to the Employment Appeal Tribunal (EAT), without paying any fee. The Fees Order required a fee to be paid when a claim form was presented to an ET and prior to the hearing of the claim. Section 42(1) of the Tribunals, Courts and Enforcement Act 2007 (the 2007 Act) provided that the Lord Chancellor might, by order, prescribe fees payable in respect of anything dealt with by the First-tier and Upper Tribunals or by an added tribunal.

The appellant trade union (Unison), supported by the Equality and Human Rights Commission and the Independent Workers Union of Great Britain, as interveners, brought judicial review proceedings, challenging the lawfulness of the Fees Order. They contended that the making of the Fees Order by the respondent Lord Chancellor, in the exercise of statutory powers, was unlawful, because the prescribed fees interfered unjustifiably with the right of access to justice under both the common law and European Union law; frustrated the operation of Parliamentary legislation granting employment rights; and discriminated unlawfully against women and other protected groups. The judge dismissed the claim. A second claim for judicial review was also dismissed. Unison’s appeals to the Court of Appeal, Civil Division, were dismissed on the basis that the imposition of a fee would not constitute an interference with the right of effective access to a tribunal under EU law, unless it made it impossible in practice to access the tribunal.

(1) Whether fees imposed by the Lord Chancellor in respect of proceedings in the ETs and the EAT were unlawful in English law, because of their effects on access to justice.

The Fees Order effectively prevented access to justice and was, therefore, unlawful. That would be so because s 42 of the 2007 Act contained no words authorising the prevention of access to the relevant tribunals. The fees prescribed by the Fees Order bore no direct relation to the amount sought and could, therefore, be expected to act as a deterrent to claims for small amounts and non-monetary claims. On the facts, since the Fees Order had come into force, there had been a dramatic and persistent fall in the number of claims brought in ETs.

Further, the Fees Order might be regarded as ultra vires where the degree of intrusion was greater than was justified by the objectives which the measure was intended to serve. In order for the fees to be lawful, they had to be set at a level that everyone could afford, taking into account the availability of full or partial remission. The evidence before the court, considered realistically and as a whole, led to the conclusion that that requirement had not been met. The fall in the number of claims had been so sharp, so substantial, and so sustained as to warrant the conclusion that a significant number of people, who would otherwise have brought claims, had found the fees to be unaffordable.

The question whether fees effectively prevented access to justice had to be decided according to the likely impact of the fees on behaviour in the real world. Fees had to, therefore, be reasonably affordable. It was not only where fees were unaffordable that they could prevent access to justice. They could equally have that effect if they rendered it futile or irrational to bring a claim. The evidence established that, in practice, the Fees Order had had a particularly deterrent effect on the bringing of claims of low monetary value (see [20], [27]-[29], [39]-[55], [87], [88], [91], [93], [96], [98] of the judgment).

(2) Whether the Fees Order could be justified as a necessary intrusion on the right of access to justice.

The primary aim of the Fees Order had been to transfer some of the cost burden of the ET and EAT system from general taxpayers to users of the system. That objective had been achieved to some extent, but it did not follow that fees, which intruded to a lesser extent upon the right of access to justice, would have been any less effective. There was no evidence that charging lower fees would reduce the income generated by fees, and, thereby, reduce the proportion of cost transferred to users from the taxpayer. In the present case, it was clear that the fees had not been set at the optimal price. It had not been shown that less onerous fees, or a more generous system of remission, would have been any less effective in meeting the objective of transferring the cost burden to users. Nor, on the evidence, had fees at the level set in the Fees Order been shown to be necessary in order to achieve its secondary aims: namely, to incentivise earlier settlements and to dis-incentivise the pursuit of weak or vexatious claims (see [99]-[101] of the judgment).

EU law had long recognised the principle of effectiveness: that was to say, that the procedural requirements for domestic actions had to not be liable to render practically impossible or excessively difficult the exercise of rights conferred by EU law. Under the European Convention on Human Rights and under EU law, the ability to pay fees was not determinative of their proportionality: it was merely one among a number of relevant factors. The amount of the fees assessed in the light of the particular circumstances of a given case, including the applicant’s ability to pay them, and the phase of the proceedings at which that restriction had been imposed, were factors which were material in determining whether or not a person enjoyed the right of access to a court (see [106], [112] of the judgment).

Given the conclusion that the fees imposed by the Fees Order were, in practice, unaffordable by some people, and that they were so high as in practice to prevent even people who could afford them from pursuing claims for small amounts and non-monetary claims, it followed that the Fees Order imposed limitations on the exercise of EU rights which were disproportionate and that it was, therefore, unlawful under EU law (see [106], [112] [117] of the judgment)

(4) Whether charging higher fees for certain claims (type B claims, concerning unfair dismissal, equal pay and discrimination claims) was indirectly discriminatory, under section 19 of the Equality Act 2010 (the 2010 Act), against women, who brought the majority of such claims, and others with protected characteristics, who also brought them. The court considered section 29 of the 2010 Act, which provided that a service-provider concerned with the provision of a service to the public should not discriminate against a person requiring the service by not providing the person with the service.

The Government clearly saw the provision of ETs as a service to the public, to which the prohibition in section 29(2) would apply. Even if it were not seen as the provision of a service, it would clearly be the exercise of a public function, to which the prohibition in section 29(6) applied. On the facts, a higher proportion of women brought type B claims. The higher fees for such claims might put women at a particular disadvantage when compared with men. The question was whether the higher fees for type B claims could be justified as a proportionate means of achieving a legitimate aim. It had already been held that the whole Fees Order could not be justified. On the evidence, charging higher fees for type B claims had not been shown to be a proportionate means of achieving the stated aims of the fees regime. It had not been shown that the higher fee charged for a type B claim was more effective in transferring the cost of the service from taxpayers to users (see [123]-[125]-[127], [130], [131] of the judgment).

David Barr QC and Victoria Wakefield (instructed by the Government Legal Department) for the Lord Chancellor.

Aidan O’Neill QC (instructed by Balfour & Manson) made written submissions for the Independent Workers Union of Great Britain, as the second intervener.