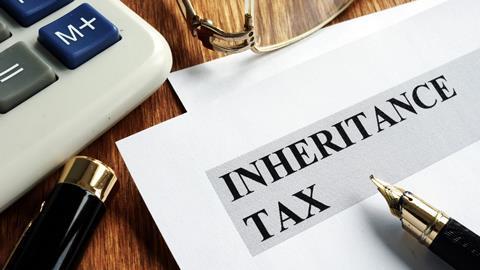 The deceased’s omission to draw lifetime benefits under her personal pension plan was be treated as a disposition by virtue of s 3(3) Inheritance Tax Act 1984, but the transfer of funds from another policy to her personal pension plan, whether taken alone or in the context of the omission, was not a transfer of value because s 10 of the 1984 Act applied. So the Supreme Court held in reversing, in part, a decision of the Court of Appeal, Civil Division, in regard to the duty of the deceased sons’ to pay inheritance tax to the respondent Revenue and Customs Commissioners.

*Revenue and Customs Commissioners v Parry and others

When the deceased’s (S) sons inherited a death benefit under her personal pension plan (PPP), the respondent Revenue and Customs Commissioners (HMRC) determined that inheritance tax was due, on the basis that both the transfer by S of funds into the PPP, and her omission to draw any benefits from the plan before her death, were lifetime transfers of value within s 3 of the Inheritance Tax Act 1984 (IHTA 1984). The appellants, who were the three executors of S’s estate (namely, her two sons and a solicitor) appealed to the First-tier Tribunal (Tax Chamber) (FTT) against HMRC’s determination. The FTT held that the transfer of funds into the PPP (the transfer) was prevented from being a transfer of value by IHTA 1984 s 10(1) because, it was not intended to confer any gratuitous benefit on anyone. However, the FTT dismissed the appeal in relation to S’s omission to draw benefits from the PPP (the omission), holding that the sons’ estates had been increased by the omission, and that s 3(3) required that S be treated as having made a disposition at the latest time when she could have drawn those benefits. Each side appealed to the Upper Tribunal (Tax and Chancery Chamber) (UT). The FTT’s decision that the transfer into the PPP fell within IHTA 1984 s 10(1) was affirmed. The FTT’s decision in relation to the omission to draw benefits was reversed, on the basis that s 3(3) did not apply because it was not the omission that had increased the sons’ estates, but the discretionary decision of the pension scheme administrator to pay the death benefits to them. Accordingly, no tax was payable on either transaction. On HMRC’s appeal to the Court of Appeal, the court held that both the transfer and the omission gave rise to a charge to tax. The appellants appealed against both of those decisions.

The present appeal required particular focus on the condition that the disposition ‘was not intended, and was not made in a transaction intended, to confer any gratuitous benefit on any person’. Although s 10(1) was the principal subsection, s 10(3) was important too, because it provided an extended meaning for the concept of a ‘transaction’ in s 10(1), so that it ’included a series of transactions and any associated operations (see [12] of the judgment).

What was crucial in the present case was what S had intended. Given that, even factoring in a legal analysis of the sons’ position at each stage, the disposition could not be said to have conferred a gratuitous benefit on them, it would be surprising if it could nonetheless be concluded that there had been a failure to show the requisite absence of intention. The finding of the FTT had been that S had not intended to improve the sons’ position by transferring the funds. In the circumstances of the case, making the nomination had not amounted to conferring a relevant benefit, and S’s benign intention in that regard could not amount to an intention to confer gratuitous benefit (see [65] of the judgment).

The transfer of the funds on its own was not a transfer of value because s 10 applied (see [66] of the judgment).

(2) Whether (in relation to the omission), on the facts of the case and on the proper construction of the IHTA 1984 s 3(3), there had been a material break in the chain of causation between S’s omission and the increase in value in her sons’ estates, by virtue of the fact that the payment to the sons had resulted from the exercise of a discretion by the pension scheme administrator..

On the facts, by omitting to draw lifetime benefits under the PPP, part of S’s intention had been to benefit her sons. The question was whether that intention had coloured the transfer with an intention to confer gratuitous benefit which it would not have on its own (see [67] of the judgment).

The result depended upon the degree to which one isolated investment in the PPP from its context. The PPP was not a first investment in a pension scheme. The funds had already been invested in another policy (the s 32 policy), and S’s essential scheme, of not drawing a lifetime pension in order to benefit her sons by leaving them her death benefits, could have been achieved without any change of pension policy. There had been no need to transfer the funds at all and no benefit in doing so. On the facts and case law, the omission and the transfer had not been relevantly associated (see [88] of the judgment).

The appeal would be allowed in relation to the transfer (see [89] of the judgment).

(3) Whether ‘the value … of another person’s estate … is increased by’ S’s omission, within the meaning of IHTA 1984 s 3(3) (as amended by s 156 of, and para 8 of Sch 20 to, the Finance Act 2006). The appellants submitted that it could not because there was not a sufficient connection between the omission and the increase in value in the sons’ estates. They argued that for matters to come within IHTA 1984 s 3(3), the omission had to be the immediate cause of the increase in the value of another’s estate, with there being immediacy both in terms of timing and in terms of cause and effect.

Consideration of the issue had to proceed upon the basis that there was a genuine discretion to be exercised by the scheme administrator (see [91] of the judgment).

In the present case, the omission had yielded the death benefits that, in fact, had increased the sons’ estates. The limited discretion of the scheme administrator had not broken the chain connecting the two events. To say that it had would be to adopt a narrow and legalistic approach to s 3(3) IHTA 1984 which was not appropriate. Putting it another way, the omission was the operative cause of the increase (see [94] of the judgment).

IHTA 1984 ss 3(3) required only that ‘another person’s estate’ was increased. It was not concerned with the identity of the other person. The benefits that had been generated by S’s omission to draw her lifetime pension were undoubtedly going to increase ‘another person’s estate’ even if the scheme administrator had not exercised its discretion in favour of the sons, but had instead chosen others from the list within the scheme rules. That added weight to an interpretation of the subsection which resulted in the omission in the case being deemed to be a disposition (see [95] of the judgment).

The transfer of funds from the s 32 policy to the PPP, whether taken alone or in the context of the omission, was not a transfer of value because IHTA 1984 s 10 applied (see [97] of the judgment).