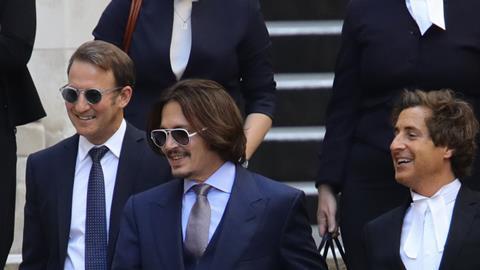 The claimant, Johnny Depp, did not succeed in his action for libel against the defendants. The Queen’s Bench Division, in dismissing the claim, held that, although the claimant had proved the necessary elements of his cause of action in libel, the great majority of alleged assaults of his ex-wife had been proved to the civil standard and, accordingly, that the defendants had shown that what they had published in the relevant articles, in the meaning which the court had held the words to bear, was substantially true.

The claimant brought a libel claim against the defendants, concerning an article first published on the website in April 2018 with the headline, ‘GONE POTTY How Can J K Rowling be ‘genuinely happy’ casting wife beater Johnny Depp in the new Fantastic Beasts film?’. The second defendant had written the article. Subsequently, the headline of the website article was amended. The online article was otherwise the same as it had been. The hard copy edition of The Sun included an article under the amended headline.

In their re-amended defence, the defendants relied on the defence of truth in s 2 of the Defamation Act 2013 (DA 2013), referring to 14 incidents (Incidents 1-14), and alleging the following meaning: ‘the claimant beat his wife [Ms H] causing her to suffer significant injury and on occasion leading to her fearing for her life’.

(1) Consideration was given to the natural and ordinary meaning to be attributed to the articles complained of.

It was common ground that the words (of the articles) meant that: (i) the claimant had committed physical violence against Ms H; (ii) that had caused her to suffer significant injury; and (iii) on occasion, it had caused Ms H to fear for her life (see [80] of the judgment).

The defendants accepted that the words meant the claimant had done those things. In the vernacular of libel actions, there was no dispute that those were Chase level 1 meanings (imputing guilt of the wrongdoing) and not merely Chase level 2 (reasonable grounds to suspect) or Chase level 3 (grounds to investigate) or some other intermediate meaning (see [81] of the judgment).

The defendants analysed the remaining differences between the parties as being whether the words imputed that: (i) the claimant was guilty of domestic abuse against Ms H ‘on overwhelming evidence’; (ii) the claimant was constrained to pay no less than £5m to compensate Ms H for the physical violence he had inflicted on her; (iii) [such physical violence] had resulted in him being subjected to a continuing restraining order; and (iv) due to the claimant’s physical violence against Ms H he was not fit to work in the film industry. The present court agreed that that was an accurate distillation of the differences in the competing meanings (see [81]-[83] of the judgment).

The defendants’ submissions were accepted. The words complained of in the articles had the meanings for which they contended. Accordingly, the court agreed that the claimant’s reference to ‘overwhelming evidence’ made no difference to the meaning which the defendants had prove. They accepted that the words alleged that the claimant had been violent to Ms H. If they established the substantial truth of that sting to the necessary standard of proof, it would be immaterial whether or not the evidence was ‘overwhelming’ (see [84] of the judgment).

Further, the published words did not state or suggest that the claimant had paid Ms H £5m as compensation for his violence. There was no reference to Ms H having sought damages for his violence. Nor would a reasonable reader treat the words as implying that that had been why the claimant had paid her that sum. Ms H was described as his ‘ex-wife’. An alternative explanation for the payment would be understood as having been part of a divorce settlement. There was no reference in the articles to the restraining order continuing. Further, the criticism for casting the claimant in the ‘Fantastic Beasts’ film was directed at J.K. Rowling, and not at the claimant (see [84] of the judgment).

(2) Whether the claim should be allowed.

A libel claimant had to prove that defamatory material had been published by the defendant of, and concerning, him (the claimant) and in a form that had a degree of permanence. The common law meaning of ‘defamatory’ had been supplemented by DA 2013 s 1. For an individual, such as the claimant, s 1(1) provided that: ‘(1) A statement is not defamatory unless its publication has caused or is likely to cause serious harm to the reputation of the claimant’. Although the re-amended defence did not admit that the articles which the defendants had published had had, or was likely to have, that effect, in her written closing submissions, counsel for the defendants accepted that it had (see [75], [76] of the judgment).

In the present case, the great majority of alleged assaults of Ms H by the claimant had been proved to the civil standard. The exceptions were Incidents 6, 11 and an additional confidential allegation regarding Hicksville. The defendants’ inability to make good those allegations was not of importance in determining whether they had established the substantial truth of the words that they had published in the meanings which the court had held those words to bear (see [57], [67], [206]-[573], [575], [583] of the judgment).

It followed that the claimant did not succeed in his action for libel. Although he had proved the necessary elements of his cause of action, the defendants had shown that what they had published in the meaning which the court had held the words to bear was substantially true. The court had reached those conclusions having examined in detail the 14 incidents on which the defendants relied, as well as the overarching considerations which the claimant submitted the court should take into account. In those circumstances, Parliament had said that a defendant had a complete defence. It had not been necessary to consider the fairness of the article or the defendants’ ‘malice’ because those were immaterial to the statutory defence of truth (see [585] of the judgment).

The claim would be dismissed. The parties would have an opportunity to make submissions in writing as to the precise terms of the order which should follow the court’s decision (see [584], [585] of the judgment).