Budget: no end to austerity for justice

Any hope that rising concern about the state of the justice system would prompt an outbreak of Treasury generosity were dashed today. After a speech in which the chancellor of the exchequer made no mention of the subject, the Treasury’s Budget Document reveals that the departmental resource budget for the Ministry of Justice will shrink from £6.3bn in 2018/19 to £6bn in 2019/20. 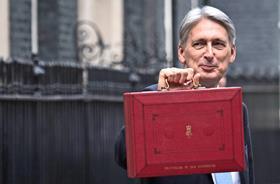 On actual spending commitments at the MoJ, the document notes that the Budget will fund construction of the new £170m HM Prison Glen Parva, and provides £30m in 2018/19 to improve ‘security and decency’ across the prison estate. A further £21.5m would be invested in the ‘wider justice system’.

However today’s figures confirm that by the end of 2019/20, the MoJ’s day-to-day budget will have fallen by more than third in the decade since 2010/11.

The continued squeeze on justice was in marked contrast to spending increases in a budget the chancellor billed as an ’end to austerity’.

Speaking after the budget announcement, shadow justice secretary Richard Burgon said: 'Despite what the Tories promised, today’s budget does not end austerity. Justice has been cut to the bone, but there's still hundreds of millions of pounds of justice cuts to come by 2020.'

Law Society president Christina Blacklaws commented:  'While the chancellor may have announced an extra £21.5m for the "wider justice system", it’s a drop in the ocean and doesn’t come close to the hundreds of millions cut from legal aid over the past five years.

'Courts, prisons, policing and legal aid are all under extreme pressure – and the money announced in the budget doesn’t begin to address the problems the justice sector is facing.'

Former Labour justice secretary Lord Falconer pointed out that a further 3% of cuts are planned between 2020 and 2023. He tweeted: '2010 to 2023 Justice budget reduced by 48%. Each Lord Chancellor since 2010 swore oath of office “to ensure the provision of resources for the efficient and effective support of the courts.” Now insufficient resources for efficient effective court system and it will get worse.'

Elsewhere, the government announced as expected reforms to the off-payroll working rules (known as IR35) in the private sector.  Responsibility for operating the off-payroll working rules will move from individuals to the organisation, agency or other third party engaging the worker. The change will  be introduced in April 2020 and small organisations will be exempt.

On stamp duty land tax, relief will be extended to cover shared ownership properties up to £500,000, backdated to include  properties purchased since the last budget. The government will also consult on aligning the consideration rules of stamp duty and stamp duty reserve tax and introducing ’a general market value rule for transfers between connected persons’.

In a measure that could provide some relief to small high-street firms, business rates will be cut by one-third for retail properties with a rateable value below £51,000, for two years from April 2019.