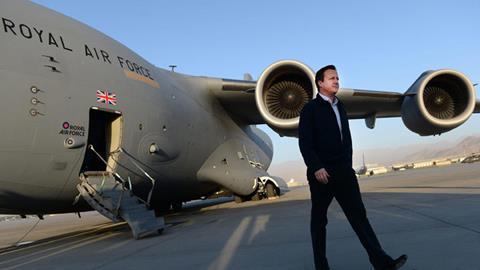 Cameron vows to end ‘industry’ of claims against armed forces

Prime minister David Cameron today pledged to work with the National Security Council to end what he called the ‘hounding’ of service personnel by claimant lawyers.

In a statement this morning, Cameron (pictured) said it was ‘clear there is now an industry trying to profit from spurious claims lodged against our brave servicemen and women who fought in Iraq’.

Cameron did not name specific law firms, but the London firm Leigh Day - which has brought several high-profile claims of this type - has already responded, saying no one should be considered ‘above the law’.

The prime minister said the National Security Council has been asked to produce a ‘comprehensive plan’ to stamp out the industry, with proposals to clamp down on 'no win no fee' arrangements, speed up the legal residence test and strengthen investigative powers and penalties against firms found to be abusing the system.

He said: ‘Our armed forces are rightly held to the highest standards, but our troops must know when they get home from action overseas this government will protect them from being hounded by lawyers over claims that are totally without foundation.’

During Prime Minister’s Questions earlier this month in the House of Commons, Cameron said Leigh Day has ‘questions to answer’ particularly in relation to the fallout from the Al-Sweady inquiry, where many claims fell apart and there was evidence some claims were false.

The firm confirmed this month it has been referred to the Solicitors Disciplinary Tribunal over allegations that witnesses gave unprincipled and untrue evidence. Leigh Day says it strongly denies allegations made by the Solicitors Regulation Authority.

On Cameron’s statement, the firm said many cases of abuse have been made in the 12 years since the Iraq invasion, with the government paying compensation in more than 300 cases.

‘The vast majority of serving army soldiers do a first-class job in protecting this country but the evidence shows that this is by no means the case for all,’ said the firm.

‘We have a system in this country that enables people to obtain justice if they have suffered abuse, damage or loss at the hands of anyone. No one is above the law, not us, not the British Army and not the government.’

In a statement this afternoon, the Law Society said: ‘The protection and promotion of human rights for all is a matter for every one of us. The concept of a universal charter on human rights was championed by Winston Churchill, and the European Convention on Human Rights arose following the world's biggest conflict. It was created to avoid such a conflict, and the atrocities that occurred during that time, from ever happening again.

‘Solicitors represent both those bringing claims against the state, and those serving in the armed forces, both regular and reserve, as trusted legal advisers. Everyone’s actions are subject to the rule of law - international human rights treaties and the law of armed conflict - and everyone’s fundamental rights must be protected.

‘Upholding the rule of law and the proper administration of justice are the first professional duties which all solicitors must deliver, and our members work hard for their client, be they individuals or the armed forces commanders, to ensure that all receive justice.

‘We wait with interest to hear of the government’s proposals for reforming the law of human rights – and now the plans to be put forward by the National Security Council, but we hope that as rights are universal, they continue to apply to everyone.

‘An independent regulatory system already exists to identify and penalise wrongdoing including any involvement in the fabrication of claims. If lawyers contravene the rules of professional conduct, or act unlawfully, they must be subject to professional discipline. Legal aid contracts already allow the Legal Aid Agency to apply sanctions where there is an official investigation.’